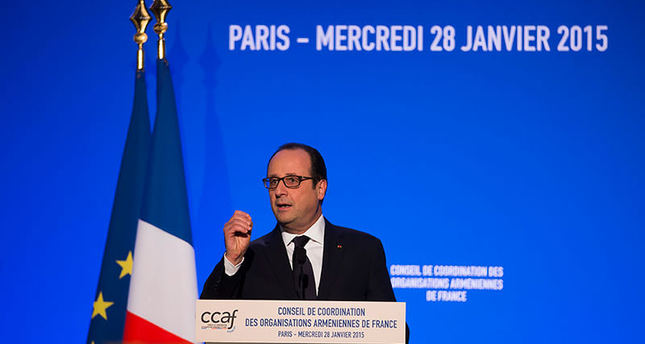 by Anadolu Agency Jan 29, 2015 12:00 am
French President Francois Hollande called on Wednesday for Turkey and Armenia to commence a new period of bilateral relations.

"It is time to break the taboos for the two nations for a new beginning," said Holland at a dinner held by an Armenian association in Paris.

The French president said the efforts to reveal the truth of Armenian issue between the two countries should continue.

Hollande said he would attend a remembrance ceremony to be held in Yerevan, the capital of Armenia, on April 24.

Referring to recognition of Armenia's allegations over the 1915 incidents, Holland said: "We will see new gestures and new steps on the road to recognition on the 100th commemoration year."

The 1915 incidents took place during World War I when a portion of the Armenian population living in the Ottoman Empire sided with the invading Russians and revolted against the empire.

The uprisings came about after a decision by the empire to relocate Armenians in eastern Anatolia.

The Armenian diaspora and the state of Armenia have both described the incidents as "genocide" and have asked for compensation.

Ankara has also long been calling for Armenia and its historians to conduct a joint academic research and study the archives of both countries.

In April 2014, President Erdoğan - at that time prime minister of Turkey - offered condolences for the Armenian deaths that occurred in 1915, a first for a Turkish statesman.