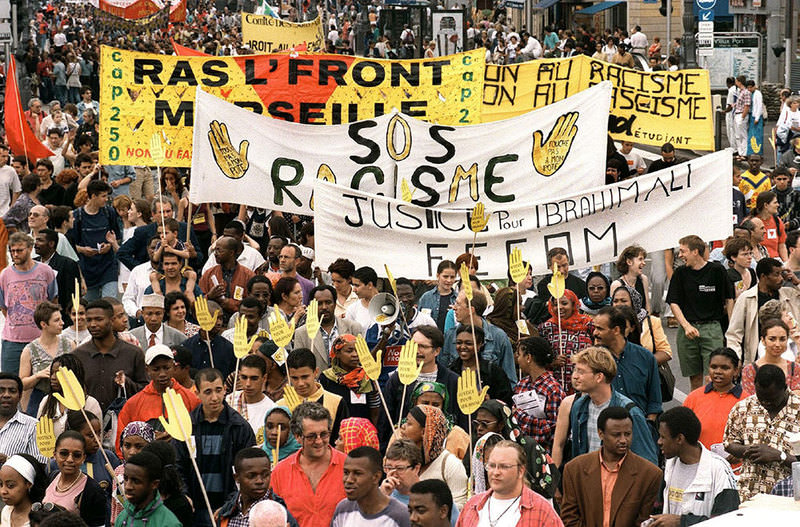 A human rights report released by the Council of Europe called on France to combat the alarming rise of intolerance and racism against all minority groups while addressing issues of vandalism and hatred toward Muslims, Jews, and the prevailing discrimination against immigrants, the Roma community and the social exclusion of disabled persons. "The rising number of anti-Muslim acts, 80 percent of which are carried out against women, and homophobic acts, which occur once every two days, is also cause for great concern.

It is essential to put an end to such acts, including on the Internet, and to punish those responsible," Nils Muižnieks, the Council of Europe Commissioner for Human Rights, said Tuesday, publishing the report on human rights violations in France. The EU report concludes that France has recently become more racist and more intolerant towards minorities and that violence towards minorities is not being prevented despite advances in the legal and institutional framework aimed at ameliorating racism.

The number of anti-Muslim and anti-Semitic incidents in France has soared recently as the EU report draws attention to the diminishing space of tolerance in French society. Anti-Semitic acts reportedly doubled in 2014 compared to 2013. Some 851 anti-Semitic acts were registered in 2014, compared to 423 the previous year, with acts of physical violence jumping to 241 from 105, the Representative Council of Jewish Institutions of France (CRIF) said. Violent acts against Muslims in January following the Charlie Hebdo attacks on Jan. 7 totaled the same for the entire previous year. During the same period, over 100 anti-Muslim incidents were reported to the police, as the National Observatory against Islamophobia indicated, and 28 attacks on places of worship and 88 threats were made in January 2014. The French President François Hollande also stressed rising anti-Semitism and anti-Muslim acts "which threaten the country's very foundations." France is home to Europe's largest Jewish population, estimated between 500,000 and 600,000 people. There are at least 3.5 million Muslims in the country as well, representing approximately 6 percent of the total population of 58.5 million.

France's Roma is another minority group targeted by vigilante attacks and stigmatized by hate speech, facing fear of harassment and discrimination. The report highlighted high levels of anti-Roma sentiment while calling on the French authorities to provide "access to healthcare, education, housing and employment, and to conduct public awareness-raising activities to combat stereotypes and prejudice against Roma." The Roma community living in France have long experienced "high levels of discrimination, stereotyping and racism that result in serious violations of their human rights," while suffering from multiple expulsions and forced evictions from France. The European Roma Rights Center accused the French government of "hav[ing] a clearly harmful impact on the human rights situation of the Roma" due to the deplorable living conditions in the informal Romani settlements in France set up by the French government. The EU report also drew attention to the deficiencies of France's asylum policy regarding the deplorable living conditions of migrants in Calais who are subjected to violent xenophobic attacks.

The report also highlighted shortcomings in the legal framework that provides inadequate guarantees to persons with disabilities. Due to marginalization and social exclusion, thousands of disabled people have chosen "to leave France to find more appropriate solutions to their situation abroad, particularly in Belgium."

With regard to the situation of disabled persons in French prisons, the European Court of Human rights condemned France on Thursday over failing to provide proper care for a disabled prisoner. The Strasbourg Court ordered France to pay 7,000 euros in damages to the prisoner who suffers from humiliation and inadequate care, as his cellmate has had to help him take care of his intimate needs.