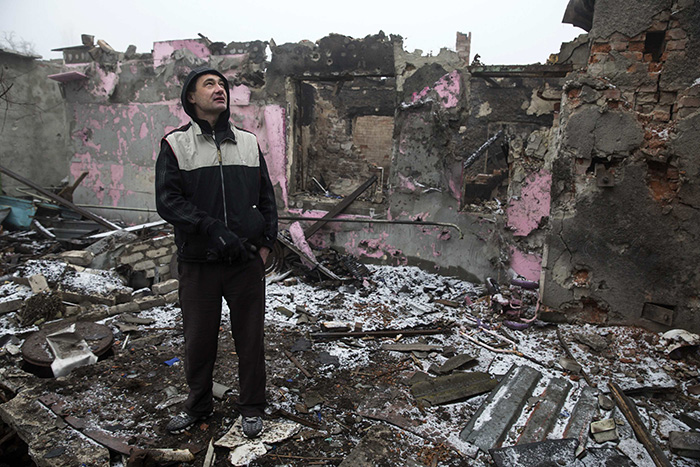 by Anadolu Agency Mar 02, 2015 12:00 am
Over 6,000 people have lost their lives in the conflict between Ukrainian forces and pro-Russian separatists since April 2014 despite successive ceasefires, a United Nations human rights monitoring group has reported.

The report came ahead of the 28th session of the UN Human Rights Council which starts on Monday.

U.S. Secretary of State John Kerry will meet his Russian counterpart, Sergey Lavrov, on the Ukraine crisis on the sidelines of the month-long UN session.

A senior UN human rights figure has accused both sides of targeting civilians during the bitter conflict in the east of Ukraine.

Speaking on Monday, Assistant Secretary General for Human Rights Ivan Simonovic told reporters in Geneva: "All sides are increasingly using heavy weaponry including multiple-launch rocket systems, as were used during the 24 January attack on Mairupul that killed 31 people, including two children."

He said that there are credible reports that heavy weaponry and foreign fighters continue to flow from Russia into Ukrainian territory - particularly in the Donetsk and Luhansk regions.

Simonovic added that the deliberate targeting of civilian areas both by Ukrainian government forces and pro-Russian separatists may constitute a war crime and, if widespread and systematic, a crime against humanity.

He added that: "More than 6,000 lives have now been lost in less than a year due to the fighting in eastern Ukraine."

Zeid warned that the human rights situation in Ukraine remains grave adding that: "Should this trend continue, this would represent a new and very deadly chapter in this conflict, expanding the areas where the rule of law and the protection of human rights are effectively absent."

The report also claims that travel restrictions placed on conflict-hit areas by the Kiev government have created "new difficulties" for local civilians.

"Many people stay because they fear for their lives if they try to move. Many others stay to protect children, other family members or their property. And some are forced to stay against their will, or are simply physically unable to leave," Zeid said.

Fighting between government forces and pro-Russian separatists broke out in Ukraine's Donbass region in April 2014.

A ceasefire was signed between government forces and the rebels in Belarus' capital Minsk on February 12, which included the withdrawal of heavy weaponry from combat areas, the withdrawal of all foreign armed formations and release of all hostages and unlawfully detained persons, as well as political reforms and decentralization in the eastern Ukrainian regions.

Since the beginning of the conflict 14,740 people have been injured in eastern Ukraine and the number of internally displaced people exceeds one million, according to the UN.
Last Update: Mar 02, 2015 12:12 pm
RELATED TOPICS