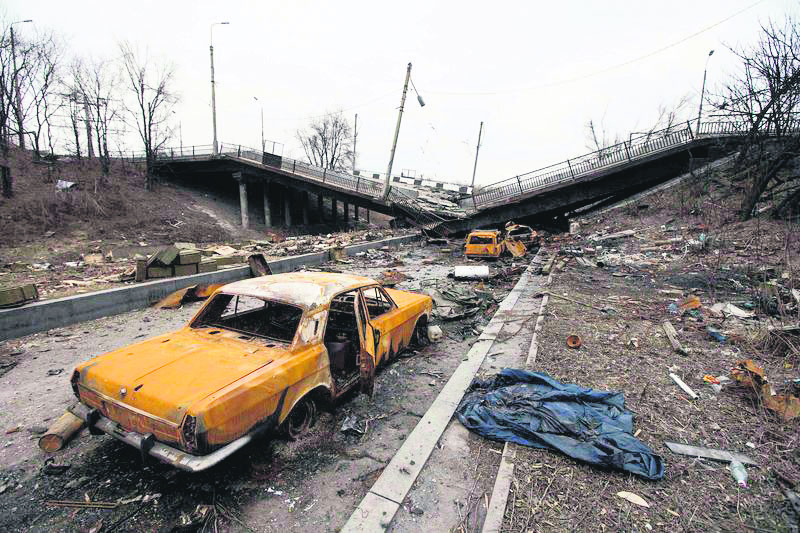 Ukraine has been dragged into bloody clashes that have killed thousands of people so far.
by Begüm Tunakan Mar 05, 2015 12:00 am

The U.S. will send around 300 troops to train Ukrainian forces in the country's western region, while the Kiev government is asking for lethal aid to fight Moscow-backed separatists in eastern Ukraine

With the Obama administration still hesitant to supply defensive weapons to Ukraine, U.S. military personnel have reportedly began to hold joint exercises with Ukraine's military as of today at the International Peacekeeping and Security Centre (IPSC) in Yavorov, in western Ukraine's Lviv region. The U.S. military assistance and training will last for an eight-month period, ending on October 31. Some 300 troops, together with a handful of U.K. forces are expected to begin training Ukrainian forces in western Ukraine in order to stave off further Russian-backed incursions into Ukraine's sovereign territory.

In addition to the increase in U.S non-lethal military assistance to Ukraine, Kiev signed a deal on the supply of drones and electronic warfare with France's Thales Group, during Ukrainian President Petro Poroshenko's visit to the IDEX-2015 exhibition this week in Abu Dhabi. "We have concluded contracts worth hundreds of millions of dollars on exports and imports [of weapons]," the first deputy chief of Ukraine's National Security and Defense Council, Oleg Gladkovsky said, while expecting to receive more military aid from abroad. In addition, Canada and the U.K. also pushed for U.S. military aid in order to stop separatists advancing in eastern Ukraine.

The U.S. Congress prepared the Ukraine Freedom Support Act of 2014, aimed at imposing sanctions against Russia and supplying weapons to Kiev. In mid-December, U.S. President Barack Obama signed the controversial bill, but mentioned that the U.S. administration would not yet take advantage of the new legislation.

The bill covers further economic sanctions against Russia and the delivery of up to $350 million worth of U.S. military hardware, including anti-tank weapons, ammunition and troop-operated surveillance drones to Ukraine. These sanctions would be expected to hit the defense and energy sectors of the Russian Federation. Russian producers, transferors, or brokers of defense articles would also be hit by the sanctions. However, U.S. authorities expressed concern over these sanctions, which would possibly conflict with the national security interest of the country.

According to a survey conducted between February 18 and February 22, there is increased public support for the proposed U.S. military aid to Ukraine. However, the majority opposes the bill rather than being in favor of the U.S. sending lethal weaponry to Kiev for the fight against Russia-backed separatists in eastern Ukraine. According to the figures released by the Pew Research Center, since April 2014, the number of people who oppose U.S. military aid to Ukraine has decreased, with 53 percent opposing the bill in February 2015. The ratio was much higher in April 2014, with 62 percent opposing the bill.

The survey continues to show increased support for additional economic and diplomatic sanctions against Russia. The majority of the U.S. public that took part in the national survey favors the U.S. increasing sanctions on Russia, while 34 percent are opposed.

As the heavy clashes continue unabated in eastern Ukraine, more than 5,358 people have been reportedly killed and 12,235 injured, according to U.N. figures. The shaky February 12 cease-fire agreement is generally holding firm in violence-stricken eastern Ukraine. However, breaches of the renewed Minsk accords have been widely reported, demonstrating that the months-long crisis in Ukraine's east has yet to be resolved, despite a series of mediating talks and peace efforts.
Last Update: Mar 05, 2015 10:05 am
RELATED TOPICS