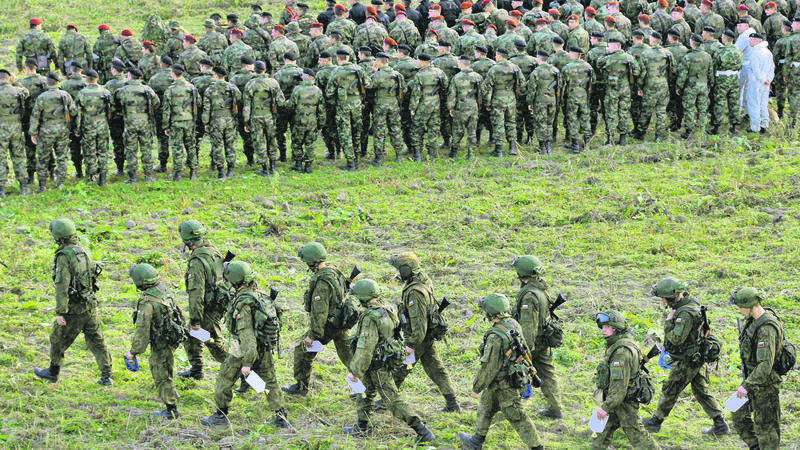 by Compiled from Wire Services Mar 06, 2015 12:00 am
Russia's Defense Ministry said on Thursday that large-scale military exercises had started in southern Russia and in disputed territories on Russia's borders. The exercises involve over 2,000 anti-aircraft troops and 500 items of weaponry and will last until April 10, Interfax news agency reported. The Defense Ministry said the exercises were taking place in Russia's Southern and North Caucasus Federal Districts, as well as on Russian military bases in Armenia, the Georgian separatist regions of Abkhazia and South Ossetia and Ukraine's Crimea region, which Moscow annexed last year.

At a news conference in Moscow unrelated to the exercises, Russian Deputy Defense Minister Anatoly Antonov said NATO activities on Russia's borders far exceeded anything the Russian military was undertaking. "NATO states are using the situation in the south-east of Ukraine as an excuse to ... move forward, closer to Russia's borders," Interfax quoted Antonov as saying. On Wednesday, a NATO flotilla arrived in the Black Sea to train with ships from the Bulgarian, Romanian and Turkish navies, the defense alliance said.

The United States' senior envoy to Europe alleged Wednesday that Russia had deployed "thousands and thousands" of troops to neighboring Ukraine. Speaking to a congressional foreign affairs committee, Assistant Secretary of State Victoria Nuland also told U.S. lawmakers that Russia was flooding eastern Ukraine with military hardware. "Since December, Russia has transferred hundreds of pieces of military equipment, including tanks, armored vehicles, rocket systems, heavy artillery," Nuland said. "The Russian military has its own robust command structure in eastern Ukraine... they are funding this war, they are fueling it and commanding and controlling it." Nuland was not able to say exactly how many Russian troops were in eastern Ukraine, where pro-Russian rebels are battling loyalist security forces, but estimated the number to be "in the thousands and thousands."

On Tuesday, Western leaders, including U.S. President Barack Obama, called for a "strong reaction" from the international community to any major violation of a ceasefire in eastern Ukraine as they sought to further pressure Russia over the conflict. The leaders did not specify what a "major" break from the accord might be, nor what response it would provoke, but hinted at the possibility of further sanctions on Moscow. But, in her testimony to the House Foreign Affairs Committee, Nuland suggested that Washington and its partners were ready to further tighten economic sanctions on Russia. She also accused the Kremlin of violating the terms of a ceasefire deal agreed in Minsk. "We have already begun consultations with our European partners on further sanctions pressure should Russia continue fueling the fire in the east or other parts of Ukraine, fail to implement Minsk or grab more land as we've seen in Debaltseve," she said.

At the same time, Kiev is taking steps to prepare for a future resumption of violence, with the parliament on Thursday approving an increase of the military to 250,000 troops from the current 235,000. British Foreign Secretary Philip Hammond was to visit Kiev to meet Ukrainian counterpart Pavlo Klimkin later Thursday. The visit follows talks in the Ukrainian capital with Italian Prime Minister Matteo Renzi, and US Deputy Secretary of State Antony Blinken is set to arrive Friday to show "steadfast support for Ukraine in the face of continuing Russian aggression." Britain and other Western states are watching the state of the ceasefire for signs of another major flare-up in violence, reserving the possibility to increase sanctions against Russia and even threatening to send military aid to Ukraine.

The military exercises are likely to be viewed in the West as a show of force as relations between Russia and the West are at their most strained since the Cold War because of the Ukraine crisis. Ukraine and the West accuse Russia of directing a separatist assault in eastern Ukraine with its own troops and weapons. Russia has repeatedly denied those accusations. Moscow denies any involvement in the conflict, which has cost some 6,000 lives over the past year although it admits some Russian troops may have volunteered to fight with the rebels while on leave from their regular units.
Last Update: Mar 06, 2015 2:18 am
RELATED TOPICS