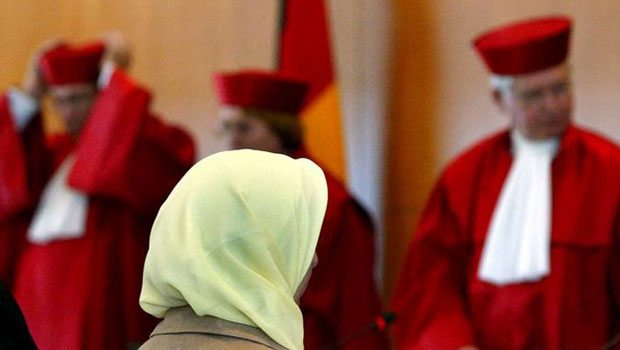 | Photo: DHA
by Anadolu Agency Mar 13, 2015 12:00 am
Germany's top court annulled on Friday a "general ban" on teachers wearing headscarves in schools and ruled that the ban could be imposed only under certain conditions.

The Federal Constitutional Court ruled that Muslim teachers could only be denied from wearing headscarves when either there was a "concrete danger" to the peaceful environment of schools or state neutrality was undermined.

The court revised its previous 2003 ruling that imposed a blanket ban on Muslim teachers from wearing headscarves, arguing that it violated the principle of the state's neutrality.

Upon an appeal made by two female Muslim teachers from the state of North Rhine-Westphalia, the court revised its earlier ruling and concluded that an abstract interpretation of a threat to state neutrality would not be sufficient to impose a general ban on headscarf.

Germany's Muslim community welcomed the ruling as a step in the right direction.

Nurhan Soykan, Secretary-General of the Central Council of Muslims in Germany, said that the ruling was an important step. "We welcome this decision, even if it does not mean a general authorization for wearing headscarf," Soykan said.

Germany has approximately four million Muslims; around three million of them are of Turkish origin.