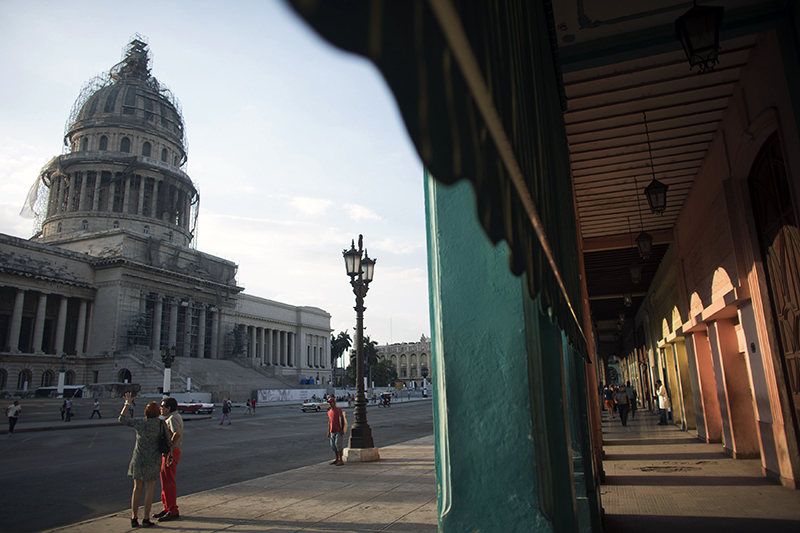 | Photo Credit: Reuters
by Mar 14, 2015 12:00 am
EU foreign policy chief Federica Mogherini is to visit Cuba later this month in a bid to spur talks aimed at normalising ties with the Communist-led island state, the first such trip by a top EU diplomat.

The planned visit appears to mark a further thaw in relations between Cuba and the West, especially after the dramatic rapprochement between Havana and Washington in the last few months.

Mogherini will meet Cuban Foreign Minister Bruno Rodriguez on the March 23-24 visit to Havana which "comes at a crucial time" for negotiations between the two sides, her office said in a statement Saturday.

"Cuba is facing a very interesting period and the European Union is keen to see how we can take the relationship forward with strong momentum," Mogherini said.

The meeting between the top diplomats aims at giving a shot in the arm to the talks that began some 11 months ago.

The EU and Cuba held a third round of talks between chief negotiators at the beginning of March aimed at tackling sensitive human rights issues and finalising an agreement "on political dialogue and cooperation," meant to turn the page on a decade of estrangement.

The talks marked the first meeting between the 28-country EU and Havana since the United States and Cuba surprised the world by announcing in December that they would move to restore relations after half a century.

"The EU has been closely following the developments in Cuba and its relations with key international players, which create new dynamics in the region and in Cuba itself, and provide new opportunities for all," Mogherini said.

Besides Rodriguez, Mogherini is due to meet other Cuban government officials as well as the archbishop of Havana, Cardinal Jaime Ortega, and civil society representatives.

The two sides will discuss developments in the country and "perspectives" for cooperation, Mogherini's office said.

In 2014, the EU launched its normalisation process with the Americas' only communist nation to encourage President Raul Castro to pursue reforms allowing for private initiatives without changing the one-party political system.

The negotiating sessions earlier this month, initially scheduled for January, had been postponed by Cuba just before the thaw with Washington was announced.

The EU hailed the move, calling it a historic turning point. However, Spain in January urged the EU to speed up its process of normalisation to not lose ground to Washington, particularly on trade.

Since 1996, EU policy toward Cuba has been guided by the so-called Common Position, which rules out full relations with Havana until it makes reforms in areas such as more diverse political participation and freedom of expression.

The EU suspended talks with Cuba in 2003 after Havana launched a crackdown and jailed 75 dissidents in a direct response to calls for liberalisation and greater respect for human rights.

The EU began lifting some sanctions unilaterally in 2008, the year Fidel Castro retired from the presidency permanently and power passed to his younger brother Raul.

Mogherini's statement said her visit is the first one to Cuba conducted by an EU high representative, which is Mogherini's formal title.

EU officials told AFP that Mogherini had met Rodriguez on the sidelines of a meeting of Community of Latin American and Caribbean States a few weeks ago.

They added that Mogherini's predecessor Catherine Ashton had met Rodriguez in Brussels a few years ago.

President Francois Hollande is to visit the island May 11 in what will be the first trip by a French head of state to Cuba.