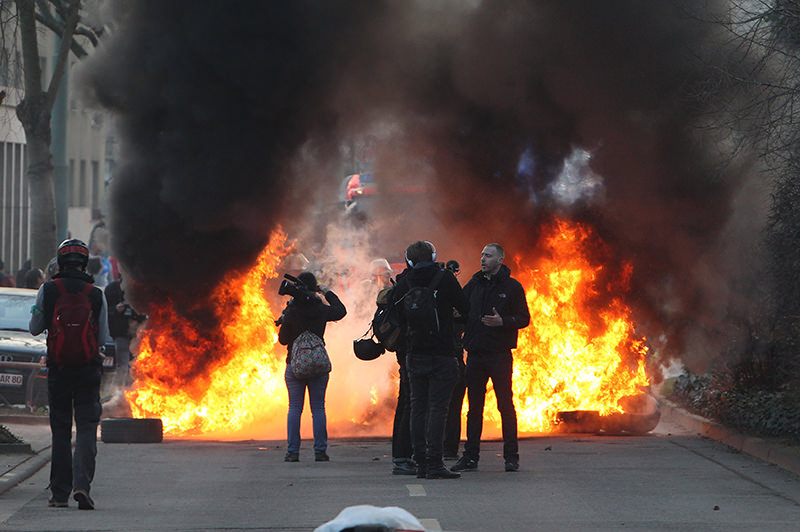 | Photo Credit: AFP
by Daily Sabah with Agencies Mar 18, 2015 12:00 am
German authorities have arrested about 300 people in Frankfurt amid violent anti-austerity protests at the opening of a new headquarters for the European Central Bank (ECB), police said on Wednesday.

Protest organizers claimed that about 10,000 demonstrators had taken to the streets to take part in the protest, which saw stone-throwing and several police cars set alight. The ECB's new building was surrounded by police barricades and barbed wire.

Blockupy organizers, an alliance of leftist groups, want to cause maximum disruption ahead of the opening ceremony to draw attention to the ECB's role in enforcing fiscal austerity across the Eurozone and what they see as promoting the capitalist system.

A police car was set on fire, windows were smashed and demonstrators threw stones at police in Frankfurt early on Wednesday ahead of a massive anti-austerity rally marking the opening of the European Central Bank's new headquarters.

Convoys of police vans sped through the streets of the financial capital with sirens blaring since the early hours and helicopters could be heard hovering overhead.

The ECB officially inaugurates its twin-tower headquarters at 11:00 am (1000 GMT) in the presence of central bank president Mario Draghi and around 100 guests.

But around 10,000 anti-capitalist protesters, marching under the Blockupy banner, are rallying in protest, with a special train of 800 activists arriving from Berlin and 60 buses from 39 different cities across Europe.

Alongside the International Monetary and the European Commission, the ECB forms part of what was formerly known as the troika - a committee that seeks to ensure strict adherence to Eurozone fiscal rules in cash-strapped member states through budget cuts and the implementation of tough economic reforms.


The ECB moved across Frankfurt late last year into its new headquarters in a twin-tower skyscraper, located on the site of an old wholesale fruit and vegetable market in the eastern part of the city.

The protest organisers, a group called Blockupy - named after the Occupy Wall Street movement in 2011 - estimated that about 10,000 demonstrators were at the rally. Thousands came into the German financial capital from other parts of Europe.

The Blockupy alliance says activists sought to blockade the new headquarters and to disrupt what they term capitalist business as usual. Anti-austerity activists received a political boost when Greece's left-wing Syriza party won elections there in January by campaigning against the bailout deal and its conditions, which they say has led to a "humanitarian crisis." Refusal of the conditions, however, has led to the withholding of further aid and the possibility of a chaotic debt default by the government.