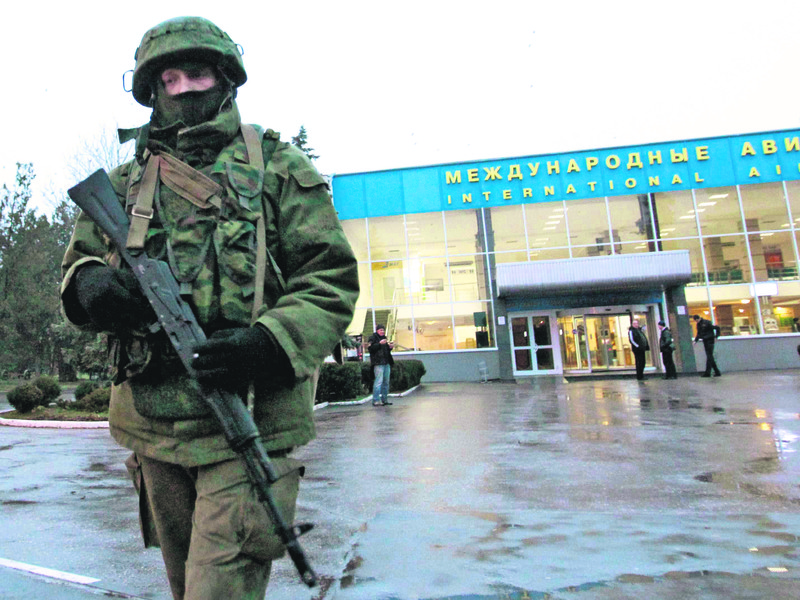 by Daily Sabah with AA Mar 23, 2015 12:00 am
Russia has increased its influence in Crimea in the social, political and economic fields since it annexed the region a year ago. Crimea was formally annexed by Moscow after an illegal independence vote on the heels of violent anti-government protests in the Ukrainian capital Kiev that led to the overthrow of then-president Victor Yanukovich. Russia began by banning broadcasts from Ukrainian television and the Russian, Ukrainian and Tatar languages were added to the official languages of the region. Russian, however, has become a compulsory language in schools, whereas the other two are optional languages. In addition, sections from the Bible were added to the books of first grade classes. Clocks were also set one hour back to match with Moscow time and Crimea's new administration obliged Crimeans to take up Russian citizenship as well as changing the autonomous region's constitution. Moscow has notably focused its weight in the military field in the Crimea region and deployed an estimated 40,000 troops with tanks, ships and warplanes in the port city of Sevastapol, one year after its annexation. Russia deployed defense units, BAL-E and Bastion type new missile systems to the Balbek Air Base located in Sevastopol. The Russian government is yet to refuse allegations that Russia will deploy nuclear weapons in the region.

Crimean Turks were particularly affected by the annexation and their political presence has been hindered. The first example of this was a ban imposed on the leader of Crimean Tatars, Mustafa Dzhemilev, from entering his homeland in April 2014. The Crimean News Agency's operations were halted by Russian authorities. They were asked to broadcast in line with Russia's laws and later not granted authority to broadcast at all. The ATR television channel, which was the broadcast body of Crimean Turks, was stormed and all its equipment was taken. The channel will have to halt its broadcasts as of April as it has not been granted the necessary permission to continue.

Russian rule has also changed social life in Crimea, as there is a ban on open air meetings and the operation of non-governmental organizations. Hassan Amrsaliyev, the head of Crimea-based NGO Fraternity, said, "We have not been able to hold any activities since the beginning of the annexation, just in closed areas such as museums." Amrsaliyev said their application, to hold a meeting to mark the 'day of the victims of Stalinism' on August 23, was rejected. Tourism is another field that has been severely impacted by the annexation, as international and Ukrainian tourism companies have left the region.

Mustafa Abdülcemil Kırımoğlu, leader of the Crimean Tatars, urged Western countries to stay united in keeping up sanctions pressure on Russia over the conflict in eastern Ukraine. Kırımoğlu's statements came after the first anniversary of the Russian invasion of the Crimean peninsula.

After the annexation of Crimea, the Crimean leader was refused permission to enter his homeland by Russian authorities, as an act of violation of international human rights. Russian authorities also restricted freedom of movement for some other Tatar leaders who were trying to return to Crimea, and threatened the Parliament of the Crimean Tatars with terminating the parliament by declaring their work illegal.

Following the Russian annexation of the Crimean peninsula on March 18, 2014, the fall of the Crimea into the hands of Putin's Russia was interpreted as a frightening reality for Crimean Tatars, as it would signal an end to the freedom they enjoyed within Ukrainian territory with regard to Russian provocations against the Crimean Tatar minority in the annexed territory. Many Crimean Tatars, which constitute 12 percent of Crimea's largely ethnic Russian population of about two million, have felt insecure due to the possible return of Stalinist-like repression. According to U.N. figures, at least 7,200 people from Crimea have become internally displaced due to numerous difficulties arising from the less than two month Moscow rule right after the Crimea referendum.

Considering the vociferous response of the international community to the Crimean referendum, underscoring the illegality of this referendum that contravened international law on territorial integrity, the Tatars, 12 percent of Crimea's largely ethnic Russian population of about two million, have been highly critical of Moscow's annexation of the peninsula previously governed by Ukraine. It has been noted that many Crimean Tatars were unhappy with the result of the referendum when local authorities announced that 97 percent of those who voted were favorable to the idea of join Russia.
RELATED TOPICS