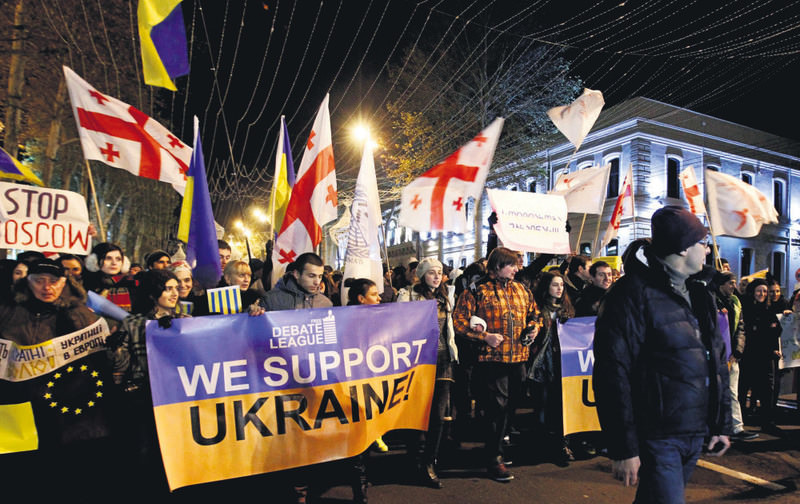 Georgians who suffered from Russian aggression in 2008 side with the Kiev administration.
by Daily Sabah with AA Mar 23, 2015 12:00 am

Despite NATO and the West's criticism, Russia continues to exert its authority in break-away territories of former Soviet states Georgia has responded by giving unconditional support to Kiev

A number of Georgian bureaucrats have key roles in Ukraine, supporting President Petro Poroshenko against Russia while Georgian fighters have also been participating in clashes against pro-Russian rebels in the east of the country. The most widely known Georgian politician in Kiev is Mikheil Saakashvili, former president of Georgia, who is now the chairman of the Ukrainian president's International Advisory Council on Reforms. Saakashvili was the Georgian president during the Russo-Georgian War in August 2008, following worsening of relations between the two countries.

Having left Georgia soon after the country elected its new president in November 2013, Saakashvili works today for the current Ukrainian government together with other former Georgian officials. Among them are Ukraine's Health Minister Aleksandre Kvitashvili, First Deputy Minister of Internal Affairs Eka Zguladze, Deputy Minister of Justice Gia Getsadze, as well as Deputy General Prosecutor of Ukraine Davit Sakvarelidze and Economy Advisor to Ukrainian President Levan Varshalomidze. They are now, except Saakashvili, Ukrainian citizens, having had to leave their Georgian citizenship due to the lack of legal ground for dual nationality. With the other Georgian officials in local governments, they are all representing Georgia in Ukraine in some way, Saakashvili said, speaking to The Anadolu Agency in Kiev. Accusing Russia of trying to re-establish the Soviet Union, Saakashvili said the destinies of Ukraine and Georgia depend on each other more than ever before. "All the Soviet Republics are in the same situation against Russia, which has now reactive psychosis and is trying to re-establish The Soviet Union," he stressed. Russia aims to take most of the eastern Ukraine, Saakashvili claimed, adding it wanted to spread across Georgia, Azerbaijan, and Moldova.

In August 2008, Saakashvili, Georgia's former head of state, failed to regain control of the area after Russia and South Ossetia's separatists defeated a Georgian incursion into South Ossetia in a bloody five-day conflict. There are some criminal charges filed against Saakashvili, accusing him of abusing his authority to forcefully break up the anti-government demonstrations in Tbilisi in November 2007, and of raiding and illegally seizing the premises of Imedi TV following the broadcast of statements by opposition leaders as well as video footage of the crackdown on protesters by the riot police. Meanwhile, The Georgian public prosecutor has repeatedly demanded Saakashvili's extradition. "My extradition is impossible," Saakashvili told AA. "None of the countries, except for Russia, take it seriously," he added.

Meanwhile, Russia is continuing to expand its sphere of influence over ex-Soviet state Georgia by building closer economic and military ties with the Russia-backed separatist region, Abkhazia. Recently, a new integration treaty was signed between Russia and Abkhazia. Moscow's aim is to strengthen its military presence thus expanding its sphere of influence over the self-proclaimed independent region. In addition to Russian military and economic assistance given to the separatist enclave, the treaty would also provide Abkhazians the ability to obtain Russian citizenship.

Russia and self-proclaimed South Ossetia signed the treaty, which is still in effect today, in September 2008 in an effort to improve mutual cooperation, thus deepening ties between the separatist enclave and Moscow government in defiance of the pro-Western Georgian government. After the dissolution of the Soviet Union there have been strained relations between the former Soviet republic of Georgia and Russia. Relations became tense in 2008 after Russia went to war with Georgia after they decided to break away from Russian rule. Since then, Russia has provided significant backing and support to separatists in self-proclaimed autonomous regions while enhancing its influence over these separatist regions. Since the Russian invasion of Abkhazia, Russia has maintained a dominant role over the region's foreign and economic affairs. The break-away region Abkhazia, with its population of 240,000, became dependent on Russia for security and economic aid.

Despite Georgia's Western-leaning ways, Russia has put greater pressure on it. Georgia has attempted to strengthen their political and economic ties with Europe instead of Russia. Moscow has sought to expand its sphere of influence through backing and financing secessionist movements in break-away regions like the Donbass region in Ukraine, Abkhazia in Georgia and Transnistria in Moldova. Moscow's aim is to strengthen its military presence through deploying its military in the regions in order to keep these break-away regions under its control. A new integration treaty was signed between Russia and Abkhazia, in an effort to improve mutual cooperation, thus deepen ties between the separatist enclave and the Moscow government in defiance of the pro-Western Georgian government. Meanwhile, Georgia has developed ties with the Kiev government through providing humanitarian and political support to Ukraine.