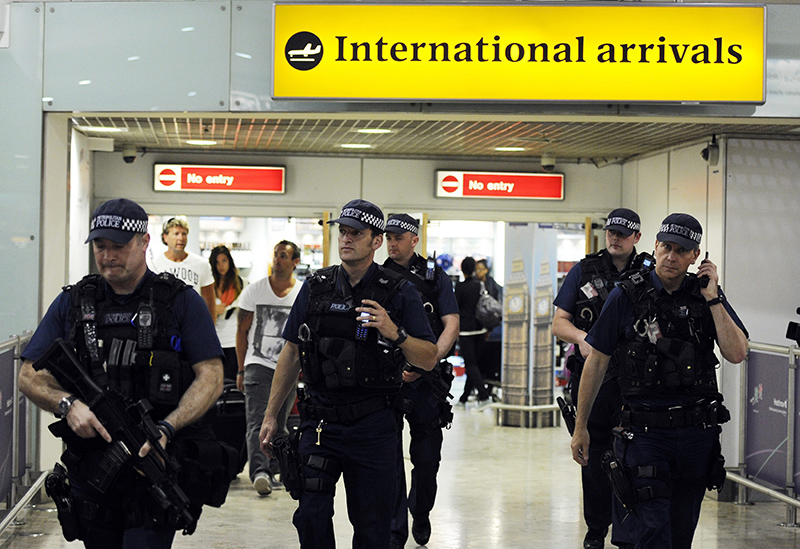 | Photo: EPA
by Compiled from Wire Services Mar 26, 2015 12:00 am
The issue of youngsters going to Syria is "Britain's problem, not Turkey's," the chairman of the U.K. parliament's Home Affairs Select Committee said.

Kaith Vaz has been a Labour Party Member of Parliament for Leicester East since 1987. Since 2007, he has served as chairman of the Home Affairs Select Committee.

He spoke to Asli Aral, head of Anadolu Agency London office, during his day-long visit to Turkey on Wednesday.

"Prevention is always the best policy and therefore we need to send a very strong wake-up call to communities that they need to do more," he said.

The British MP made his comments a day before the committee he chairs published a report entitled "Counter-terrorism: Foreign fighters."

Vaz said he thinks that lessons have been learned from the incident of the three young girls who fled to Syria through Turkey.

He warned those who think it is going to be easy to get a flight for Turkey and then cross the border to Syria.

"It is going to be much tougher and much more difficult," he said, adding that, "I am very grateful to the Turkish authorities, officials and police for the work they are doing."

Vaz said that the current system is not functioning well, as the case of the three teenage girls illustrated.

He added, however, that the system has been developed lately, citing the case of the three British teens spotted in Turkey and sent back to Britain.

He said the committee's report suggested setting up a hotline, "to help parents and others trying to stop the youngsters going to Syria."

Vaz said also that the report will pay attention to the importance the campaign's international dimension to stop foreign fighters from traveling to Syria.

"Without the help of Turkey and other countries, we are not going to stop that happening," he said.

Asked if he had any advice for Turkish officials, Vaz said he did not and that they, "are very grateful for what Turkey has done."

"If they find it useful to have British police officers or spotters in the airports, then they are welcome to have that," Vaz said. "We think it is a good idea, but it is up to them."

Speaking about his meeting with Turkish Airlines, Vaz said that the Turkish flag carrier is doing all it possibly can.

"They are doing everything they can and we are impressed with them," Vaz said after he met Turkish Airlines General Manager and CEO Temel Kotil.

During his visit to Turkey, Vaz also met with officials of the British Embassy in Ankara.

Meanwhile, British lawmakers on Thursday criticised the government for not doing more to prevent the radicalisation of young Britons and to stop them and other citizens travelling to join terrorist groups in places such as Syria and Iraq.

Last month three British teenage girls travelled to Syria where they are thought to have joined ISIS militants, sparking public recriminations over how they were radicalised and why they had been allowed to travel.

That incident, which was followed by several similar failed attempts to reach Syria, prompted the government to announce new measures to tighten border controls and has put renewed emphasis on potential gaps in Britain's preventative schemes.

A report by an influential parliamentary committee said the government was not engaging with mosques and community groups effectively and criticised the way police, schools and parents shared information on youths considered to be at risk.

"Radical groups from abroad are preying on young British citizens through social media to encourage them to travel abroad to join them," said Keith Vaz, chairman of parliament's Home Affairs Committee, which produced the report.

"This must be a relentless battle for hearts and minds, and without a strong counter-narrative we are in danger of failing to prevent even more departures. We are at the edge of a cliff."

It also echoed calls made by Prime Minister David Cameron for social media firms to do more to suspend the accounts of suspected extremists.

The report said policing social media sites had become impossible and said children needed to be better educated on Internet safety "in order to build a more natural resistance against radicalisation through online extremist content and propaganda."

Around 600 British nationals are estimated to have joined ISIS. Among those who have travelled to the war zones, many are women and young girls.