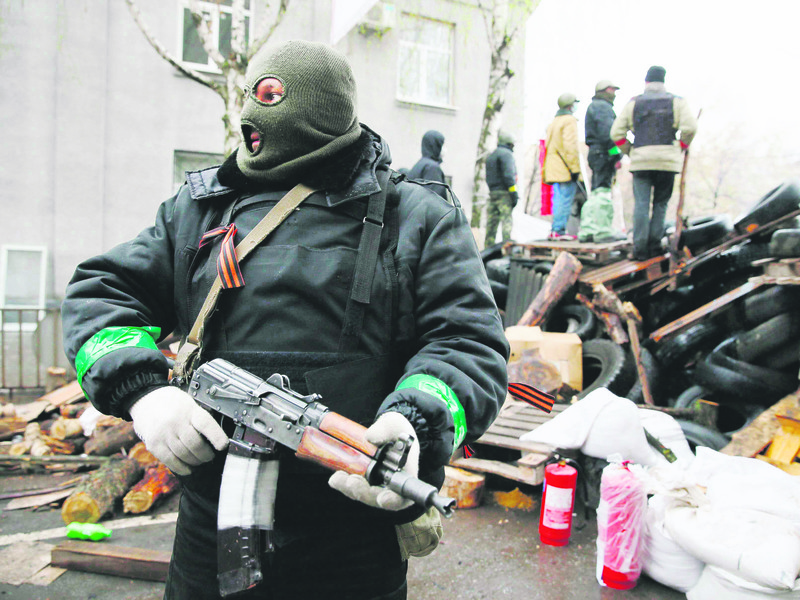 by Mar 26, 2015 12:00 am
The far-right Azov battalion, whose symbol resembles a black swastika on a yellow background, is preparing to defend the port city of Mariupol in southeastern Ukraine against a widely expected attack by pro-Russian separatists. The 1,000 strong ultra-nationalist militias has a reputation as a fierce pro-government fighting force in the almost year-old conflict with the Russia-backed rebels in east Ukraine, and is disdainful of peace efforts. But the radical views of the commanders of a group affiliated to Ukraine's National Guard which works alongside the army, and the use of symbols echoing Nazi emblems have caused alarm in the West and Russia, and could return to haunt Kiev's pro-Western leadership when fighting eventually ends. "We don't like the ceasefire at all. As with the previous ones, it'll only lead to another offensive by the enemy," Azov commander Andriy Biletsky told Reuters while watching artillery drills at Urzuf, on the shores of the Sea of Azov, about 40 km south-west of Mariupol. "Appeasing the aggressor will only lead to more aggression. This war will inevitably continue - either until our complete defeat or until our full victory and return to our land in all east Ukraine and Crimea. We believe in the second scenario," said the 35-year-old from the city of Kharkiv.

As the drills continued, other members of the battalion were in combat with the separatists at the village of Shirokino, some 60 km (38 miles) to the northeast. Shirokino, where Ukrainian and rebel positions are separated by only a few kilometres of village dwellings, is one of several places along the line of contact where fighting has continued despite a February ceasefire. Mariupol, which Azov helped recapture from the rebels last year, is a big prize. Its capture would offer the separatists the chance to open a road further south a year after Russia annexed the Black Sea peninsula of Crimea from Ukraine.

Kiev and the West say Russia drives the rebellion in east Ukraine and has sent in troops as well as weapons to help the separatists. Moscow has sided with the rebels but denies direct military involvement.

The Azov battalion originated from Biletsky's paramilitary national socialist group called "Patriot of Ukraine", which propagated slogans of white supremacy, racial purity, the need for authoritarian power and a centralized national economy. "Patriot of Ukraine" opposed giving up Ukraine's sovereignty by joining international blocs, called for rolling back of liberal economy and political democracy, including free media. In 2008, Biletsky urged "thousands of young fanatic apostles" to advance its ideas. Local media have reported on several violent incidents in which the group was involved.

Since Azov was officially created last May, it has been involved in fighting on the outskirts of the rebel stronghold of Donetsk, a battle for the town of Illovaysk which Ukrainian forces lost last summer and across the coast of the Sea of Azov. But, since Azov was enrolled as a regiment of Ukraine's National Guard in September and started receiving increased supplies of heavy arms, Biletsky has toned down his rhetoric. Most of "Patriot of Ukraine" websites are now down or under restricted access. He denied Azov's symbol was a reference to Nazism, saying it was rather a Ukrainian nationalist symbol. Biletsky said he now has infantry and artillery units and was building a proper tank force. His troops training on the cannons in Urzuf were heavily armed with quality uniforms. Biletsky said his troops, all volunteers, were "officially" making 6,000 hryvnia ($316) a month but in fact around 10,000 hryvnia. Apart from getting funds from the interior ministry, Azov is believed to be getting support from among Ukrainian super-rich oligarchs. Biletsky did not say whether and how his views have changed since he wrote the "Patriot of Ukraine" programme but said his priority now was extinguishing the pro-Russian rebellion. "We have only one goal right now - fighting for the homeland until all of it is freed. And then we will try to build a new Ukraine that we could all be proud of. We are patriots. We believe in our nation, nationalism is our ideology," he said. Biletsky, a historian by education who is married with a son, was detained in 2011 on charges of assaulting a man. He was released after an amnesty in February 2014 and his aides dismiss the case as an example of political persecution of Ukrainian nationalists under Ukraine's ousted president and Moscow ally Viktor Yanukovich. He has since been elected to the Ukrainian parliament, riding a wave of an increased nationalist sentiment in Ukraine triggered by the war.

Some Ukrainian politicians have defended Biletsky and his troops as patriots. There is lingering doubt, however, over what role Azov might play when the military conflict ends and whether its members could challenge President Petro Poroshenko and his government or threaten the wider public security. Biletsky has criticized Poroshenko for losing out on in an information war against Russia and the rebels, and is dismissive of the chances for a negotiated solution to the conflict. "How can we settle it peacefully if part of our territory is occupied? Will they give us Crimea back? How can there be a peaceful way to stop an aggression?" he said.

In a sign of persistent tensions between the pro-Ukrainian volunteer battalions and Ukraine's regular army, Biletsky blamed Ukraine's top military commanders for battlefield defeats. He said he has lost about 60 men in the conflict and wants a revamp of Ukraine's armed forces to promote a new generation of field commanders who have fought on the ground in a conflict that has killed more than 6,000 people. "We have loads of generals brought up in the Soviet Union who have no idea of combat, who rose as state officials in uniforms rather than commanding officers in the field. These people don't want to and don't know how to fight." ($1 = 19.0000 hryvnia)