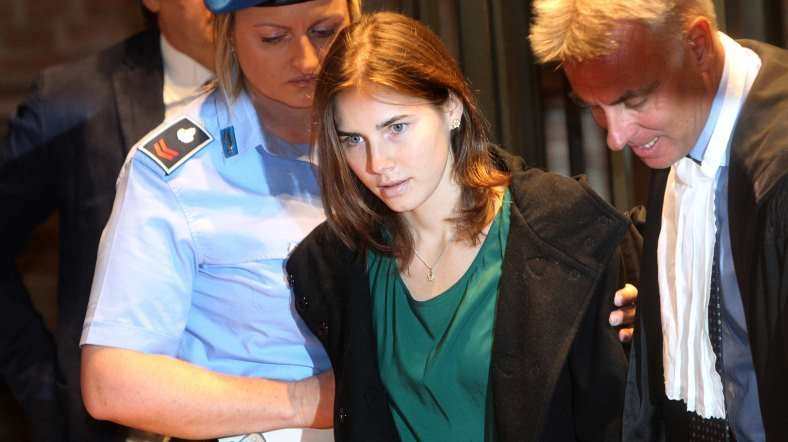 | Photo: Reuters
by Mar 28, 2015 12:00 am
Who killed Meredith Kercher? While Amanda Knox and her ex-lover celebrate their shock acquittal, the grisly case of the British student's murder is far from solved.

Eight years after Kercher was found in a pool of blood with her throat slashed, Italy's top court threw the case out late Friday, ending a legal saga which saw American Knox and Italian Raffaele Sollecito batted back and forth between courts as they were convicted, acquitted and convicted again.

Crucially, however, judges in his case ruled that he did not act alone, pointing to a lack of defence marks on the victim which showed she was pinned down while a second person stabbed her 47 times and sexually assaulted her.

The Rome court has up to 90 days to release its written judicial reasoning on the Knox and Sollecito acquittal, but the unexpected verdict immediately raises one key question: if they did not help Guede kill Kercher, who did?


In her summing up, Sollecito's lawyer Giulia Bongiorno told the court the case should be dismissed because of a "cascade of errors" committed by both police and previous judges.

DNA evidence had been contaminated by 35 people trampling through the crime scene in the early stages of the investigation, she said.

A 40-day delay in collecting a key piece of evidence which had been kicked across the room in the meantime was part of a serious of mistakes which meant judges could never say beyond reasonable doubt that her client and Knox had been there.

There was, she said, none of Knox's DNA in the room at all, which meant she was not there, because "the only creature that does not leave DNA traces is a dragonfly."

Lawyers for both said they would immediately request compensation for the four years the pair wrongly spent behind bars.

Supporters slammed a judicial system that boasts two appeal stages which often reverse verdicts and a top court that can demand cases are re-examined ad infinitum.


But some legal experts said it was that very system which saved Knox, 27, and her 31-year old ex-boyfriend.

"Amanda should be happy her trial took place in Italy," Harvard law professor Alan Dershowitz said in an interview with Italy's Il Messaggero daily.
"The American legal system would not have given her many appeal chances," he said.

Others said it was a huge embarrassment for Italy, with the case thrown out not only because the investigation was botched -- with police using dirty gloves to collect evidence -- but because judges in Perugia and Florence had made such a hatchet job of interpreting the facts.

Kercher's mother Arline said she was "surprised and very shocked" at the ruling, describing it as "odd" given the pair had been convicted twice for her daughter's murder.


The DNA contamination in Kercher's bedroom in the university town of Perugia, where she shared a flat with Knox and two other girls, was so extensive that a second killer could very well have been present -- and his traces lost.

Guede insists he is innocent: he says he had consensual sex with Kercher before going to the bathroom, where he listened to loud music on his headphones, and when he came back out she had been attacked.

He told judges at his own trial that he saw a shadow of another man running away, but later refused to testify in court as to whether Knox and Sollecito were there.

A child killer, Mario Alessi, said that Guede had told him in a prison exercise yard that Knox and Sollecito were innocent -- but Guede later rubbished the claim.

In 2013 the Ivorian sent a letter from his prison cell to the Italian television show "Quarto Grado", which said "whoever committed this terrible crime is still out there."
"If I am a liar, I say to the judges, then what is the truth?" he asked.