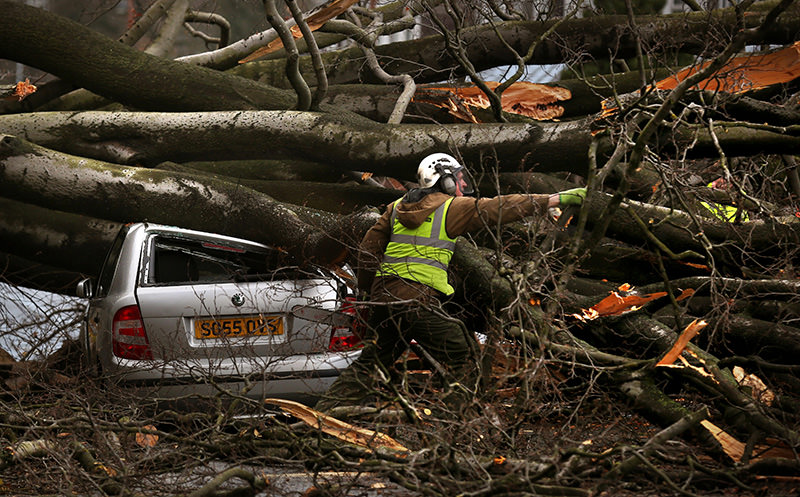 | Photo: AP
by Daily Sabah with Agencies Apr 01, 2015 12:00 am
At least nine people have been killed in heavy winds that have battered Germany, Austria, Switzerland and the UK, police said early on Wednesday.

German Press Agency reported that the death toll included four killed in Germany and Switzerland when trees fell on passing cars, three German deaths when cars skidded after roads suddenly iced over, a German killed when a wall toppled on him and an Austrian man blown to his death off a ladder.

A man in Birmingham, UK, was seriously injured when his car was crushed by a falling tree, according to the BBC.

The cyclonic storm, named Niklas by German meteorologists, is one of the most powerful in recent years in Central Europe, with gusts up to 192 kilometres per hour.

German railways said they were unable to provide a full service because trains and staff were still being repositioned. "Not all of our personnel can be at the stations where the schedule calls for them to be," said a spokeswoman for Germany company Deutsche Bahn.

A main train line running from Munich, Germany to Salzburg, Austria has been cut by storm damage.

Frankfurt airport, which is the biggest in Germany, had to cancel 180 takeoffs and landings because of the high winds.
Last Update: Apr 01, 2015 12:53 pm
RELATED TOPICS