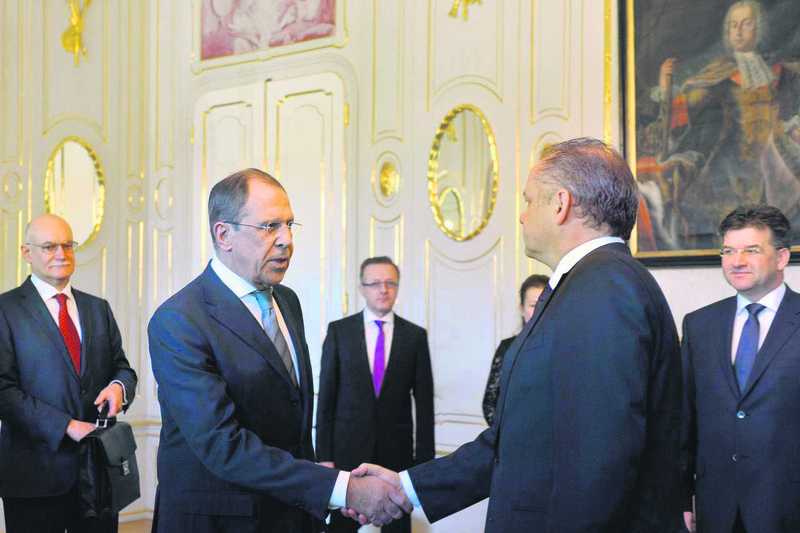 by Begüm Tunakan Apr 06, 2015 12:00 am
As the crisis in Ukraine is yet to be stabilized, the eastern European Union countries have had differing views over how to respond to Russia over the crisis in Ukraine. Even though the EU's east is a significant critic of Russia's actions in eastern Ukraine and Crimea, countries like Slovakia refuse to take serious economic measures against Russia due to the fear of damaging their own economies. As Russia's Foreign Minister Sergei Lavrov met with Slovakia's President Andrej Kiska on Saturday, Slovakia's president held Russia responsible for the crisis in Ukraine while urging for a peaceful and democratic solution.

"Russia should be responsible for implementation of the peace process in that Ukrainian region," Slovakia's president said in a press meeting on Saturday, as Russian state-run Itar-Tass news agency reported. "I hope weapons will not be used any more in the conflict in Ukraine's south-east, and its sound will be replaced by a dialogue, and all parties will observe the reached agreements." "The Russian leadership not only has opportunities, but bears a major part of responsibility for success of that process," he said. Meanwhile, early Saturday, Pro-Ukrainians and pro-Russian groups held rallies in front of the presidential palace in Bratislava.

The EU bloc fears that harsh economic sanctions would likely hurt many countries' business links with Russia. Some of them, like Germany and Italy are heavily reliant on Russian gas. The close economic ties between Russia and Slovakia have made trade and imports of Russian gas a priority over punishing Kremlin.

The ex-Soviet Baltic States have seen Russia as a clear threat to their national security and territorial integrity. Considering Russian aggression, there has been a growing fear among eastern European states that the Cold War years are returning. There is a common belief among northern European states including Sweden, Finland, Latvia, Estonia and Lithuania that the Russian threat is imminent unless a stronger European security policy is built to stop Russian aggression.

Since Russian annexation of the Crimean peninsula and Russia-backed crisis in the eastern Ukraine, the tension between Russia and the West has gradually worsened since the Cold War. The West accused Russia of violating Ukraine's territorial integrity and sovereignty, according to the 1994 treaty under which Russia agreed to respect Ukraine's borders. The Russian military presence inside Ukraine's border was seen as a breach of the principles of the founding act and a violation of international law, Russia, since the crisis broke out in February 2014, strictly denies allegations over providing support for rebel groups involved in the conflict in the Donbass region. Russian aggression in eastern Ukraine has resulted in the deterioration of the post-Cold War security order in Europe that has been protected under the NATO-Russia founding act signed in 1997, the aim of which was to build peace and security in the Euro-Atlantic area.
Last Update: Apr 06, 2015 2:13 am
RELATED TOPICS