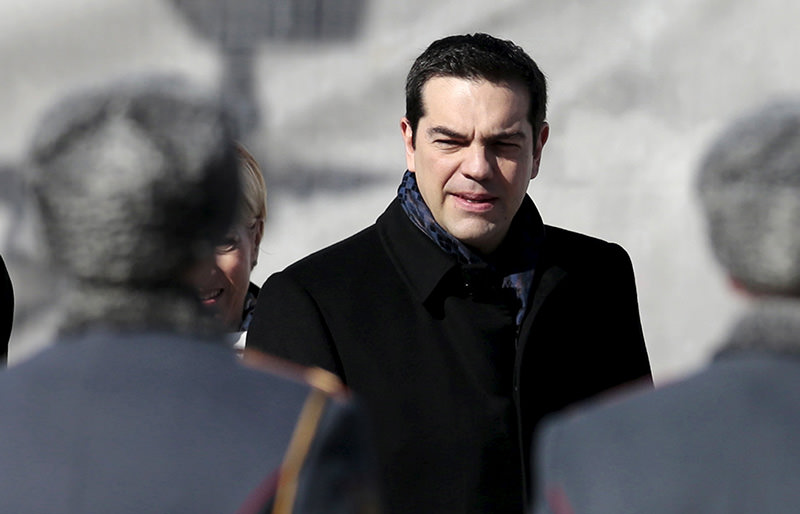 | Reuters Photo
by Daily Sabah with Reuters Apr 08, 2015 12:00 am
Russian President Vladimir Putin said Greek Prime Minister Alexis Tsipras has not asked him for any economic aid during their talks in Moscow, but Russia could provide credit for some large joint projects with Greece in future.

Putin said Greece would pay back any such loans from profits made on any such future projects. He did not give more details but said he had discussed the idea with Tsipras in detail.

Putin also said Russia would be interested in taking part in privatization tenders if Greece runs any and hoped Russian companies would not be disadvantaged compared with other possible buyers.

After long failed efforts to reach a deal with the European Union and International Monetary Fund creditors over debt and financial problems, Greece has now turned away from Europe toward Russia to improve bilateral ties and economic cooperation. Greek Prime Minister Alexis Tsipras arrived in Moscow on Wednesday to hold a meeting with Russian President Vladimir Putin. "The aim of my visit is to try together to give a new start to our relations for the good of our people and also in search of stability and security in the wider region," Tsipras said at the start of the meeting.

His visit was welcomed by Russian authorities while the European Parliament criticized the Greek prime minister's visit to Moscow, saying that a Greek move would likely break with the EU line on sanctions toward Russia, which were enforced after its role in the Ukraine crisis.

The Greek prime minister's visit came after Russia announced that it was easing the embargo on Greece and Hungary on most food imports, imposed in retaliation for the Western sanctions over the Ukraine crisis. According to Reuters, the Russian government reportedly offered Greece a discount on gas deliveries and new loans, however there is no confirmation so far made by the Russian energy ministry or Russia's state-controlled gas producer Gazprom.

"We have registered a decline in trade turnover in that sphere after Russia was forced to take retaliatory measures in response to EU sanctions. We presume that this issue will be raised in some form," Russian presidential spokesman Dmitry Peskov said stressing the importance of improving Russia-Greece economic ties, Russian state-run Itar Tass reported.

As a response to the EU warnings, the Greek government official said, ahead of Tsipras visit to Moscow, that the Greek prime minister would not ask for aid from Russia to help meet its debt repayments. However, the failed meetings with EU authorities would not be able to unlock fresh funds, dragging the country into a financial deadlock.

"Greece knows what to do within the EU framework but every country also has the sovereign right to look after and improve its bilateral relations," the official said.

Greek Prime Minister Tsipras is a harsh critic of EU-imposed sanctions on Russia saying that the economic war with Russia would severely damage EU countries' stagnant economies in return. The Greek prime minister earlier said that Western sanctions on Russia are a "dead-end policy" that would lead to "nowhere."

"I support the point of view that there is a need for a dialogue and diplomacy, we should sit down at the negotiating table and find the solutions to major problems," Tsipras told Tass.

Despite the EU's warnings, Prime Minister Tsipras is set to travel to Moscow once again to attend the May 9 parade in Moscow's Red Square marking the 70th anniversary of the Soviet Union's victory over Nazi Germany. The World War II victory anniversary commemorations have been snubbed by most Western leaders amid tensions over Russia's role in Ukraine while urging for unity between EU countries to press Russia to stop backing the crisis in eastern Ukraine.

As a former communist, the Greek prime minister has a strong relationship with his Russian counterparts. Before he came to power in January, Tsipras traveled to Moscow prior to his election victory as a move to build closer economic ties between the two Christian Orthodox nations.

Greece has long suffered from sweeping spending cuts and a painful six-year recession. Austerity measures being pursued by eurozone countries, including Greece, have led to a political battle within the countries over whether the belt-tightening policies have gone too far at the expense of economic growth. The clashes over economic policies have created political turmoil, just as in France, Austria and Italy.

Tsipras' anti-bailout government has discussed the issue with German Chancellor Angela Merkel, the driving force in the EU's austerity drive stressing that Greece should stay in the eurozone "despite the [economic] difficulties."

The historic victory of the radical left-wing party Syriza in the parliamentary election in January brought a fresh new approach to Greek politics. However, it also stirred suspicions as to whether the coalition government would be short-lived due to their harsh and uncompromising stance with the EU over the debt crisis. The meetings and decisions of eurozone finance ministers could not produce a positive outcome as Greece battles to unblock a rescue package from the EU and IMF.
Last Update: Apr 08, 2015 5:50 pm
RELATED TOPICS