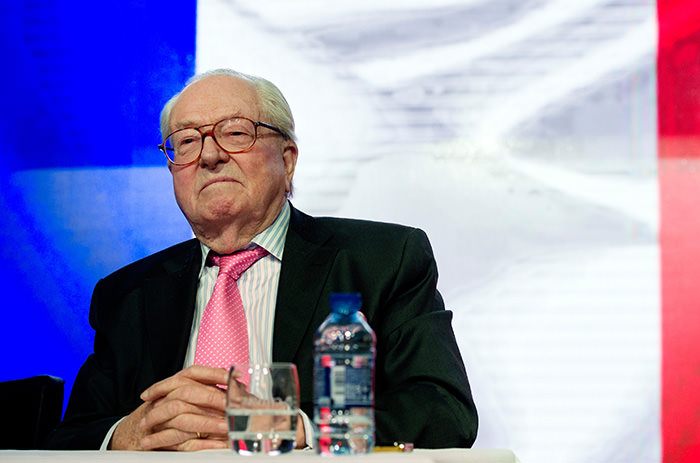 | AFP Photo
by Anadolu Agency Apr 13, 2015 12:00 am
The founder of France's National Front has announced he will not run in regional elections due to be held in December, local media reported on Monday.

Jean-Marie Le Pen, who established the far-right party in 1972, told daily Le Figaro he would not run in the southeastern Provence-Alpes-Cote d'Azur region and announced his support for the candidacy of his granddaughter Marion Marechal-Le Pen.

He told the newspaper he still thought he could be the "best candidate for the National Front."

The announcement follows a public falling-out with daughter Marine Le Pen, who has led the party since 2011, after he remarked that the Nazi gas chambers were a "detail of history." He also defended wartime collaborator Philippe Petain.

Last week, Marine Le Pen voiced her opposition to her father's candidacy, saying he had "entered a veritable spiral between a scorched earth strategy and political suicide."

She added that her father's role as honorary president of the party did "not give him the right to take the National Front hostage" and accused him of "harsh provocations seemingly designed to harm me."

Marine Le Pen, who has attempted to rid the National Front of its racist image, said she would block her 86-year-old father's bid to stand.

Jean-Marie Le Pen told Le Figaro that he was standing down to avoid "sacrificing the future of the National Front."

Asked who he would like to stand in his place, he described his 25-year-old granddaughter by his son Yann Le Pen, as an "excellent" candidate.

A statement from Jean-Marie Le Pen was due later on Monday.
He has been convicted several times for inciting racial hatred and denying the Holocaust.

The National Front came first in France in last May's European elections, with around 25 percent of the vote, the party's greatest electoral success in its 42-year history.
Last Update: Apr 13, 2015 1:47 pm
RELATED TOPICS