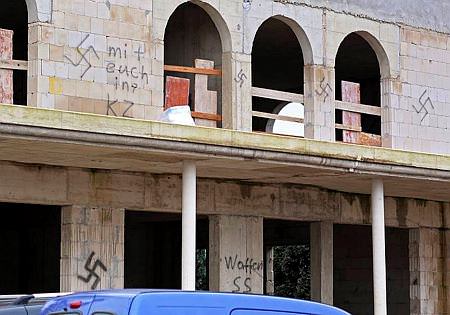 A half-built mosque in the town of Dormagen was another victim of vandalism targeting the muslim minority in Germany on Dec 22, 2014 (DPA Photo)
by Daily Sabah with AA Apr 15, 2015 12:00 am
Racist statements and swastikas have been drawn on a building, which is planned to be used as a refugee shelter, in the western German city of Mörs, Turkey's press agency AA reported on Wednesday.

German Rheinische Post newspaper quoted Mörs's Mayor Christoph Fleischhauer as saying, "This incident damages our city's image," while the police have launched an investigation to find the graffiti offender.

Alongside an anti-immigrantion stance, Germany's image has also been damaged by Islamophobic attacks on mosques.

One of the latest attacks was on late Monday night in Germany's North Rhine-Westphalia region, in the city of Witten. Belonging to a Turkish community, Sultan Ahmet Mosque was set on fire by an undenftified man. There were no casualities reported, but the incident has raised concerns that a new wave of racism and xenophobia could be sweeping the country.

In a press conference organizedon December 31, 2014, Turkey's Foreign Ministry spokesman Tanju Bilgiç had said that a total of 15 Islamophobic attacks were conducted in Germany, 11 of them targeting mosques, between August and December 2014.

Related: Another mosque set on fire in Germany in university city of Witten