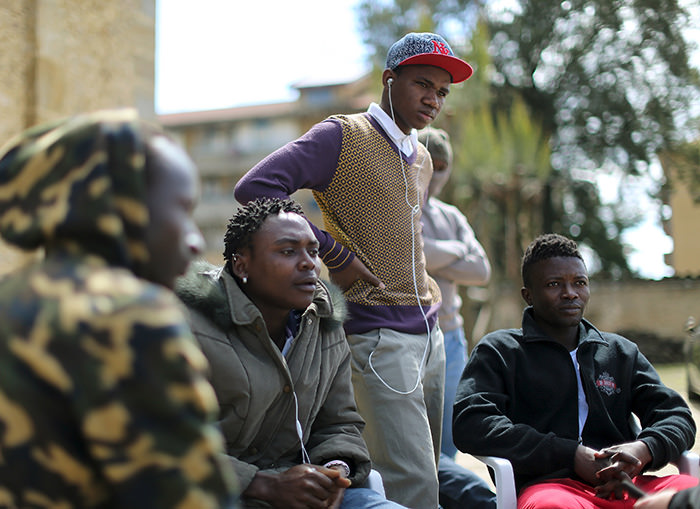 Adolescent migrants Mustafa (2nd R) from Gambia and Ishmael (R) from Sierra Leone stand in a courtyard at an immigration centre in Caltagirone, Sicily March 18, 2015 (Reuters Photo)
by daily sabah Apr 16, 2015 12:00 am
Following the tragic death of 400 migrants off the European coast, international human rights bodies have launched extensive social media campaigns to raise awareness of the devastating humanitarian situation of immigrants trying to reach Europe. The International Organization of Migration (IOM) launched the #MigrantHeroes social media campaign in order to challenge "an increasingly negative perception of migrants and their contributions to society."

IOM Director General William Lacy Swing said that a "wave of migrants to Europe is not an invasion," in an interview with CNN's Christiane Amanpour. He also urged European countries to be more open to migrants "in a period of unprecedented human disaster." The U.K.-based human rights organization, Movement against Xenophobia also launched "I am an immigrant" poster campaign to voice against the rising fear of others in European societies. In Europe, many people support anti-immigration rhetoric as more people have started to consider immigrants a threat to their society. The growing number of refugees and asylum seekers looking for shelter in Europe has fuelled xenophobia.

The EU's border agency Frontex organizes and monitors the cooperation of border police of EU member states to "send border guard personnel and equipment for joint policing of borders." Its primary mission is to keep people out of Europe instead of saving the lives of those who risk them crossing the Mediterranean.

Meanwhile, Italy pleaded for a Europe-wide response to the migrant crisis in the Mediterranean, and demanded a "clear answer" from the EU about where the refugees should be sent. "Ninety percent of the cost of the patrol and sea rescue operations is falling on our shoulders, and we have not had an adequate response from the EU," Italian Foreign Minister Paolo Gentiloni told the Italian daily Corriere della Sera, stressing that other European countries do not share the burden of the increasing number of immigrants. He also stressed that existing European mechanisms and operations are not sufficient to reduce the risks and danger, or prevent further tragedies at sea as the EU was only spending three million euros a month on its Operation Triton sea patrols.
Last Update: Apr 16, 2015 5:38 pm
RELATED TOPICS