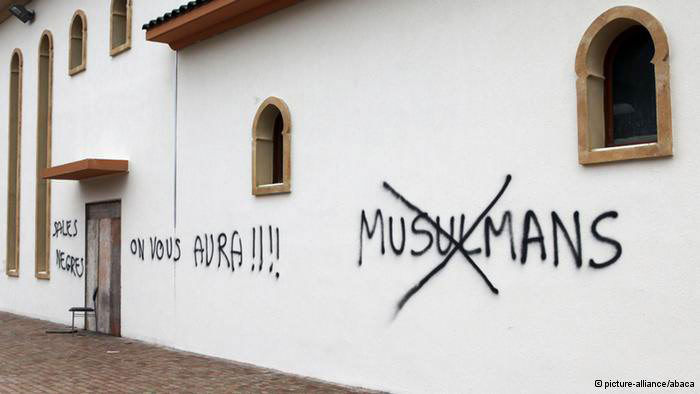 Amid rising anti-immigration sentiments among Europeans, France suffers a six-fold rise in Islamophobic attacks, counting 222 violent anti-Muslim attacks in the first quarter of this year

Anti-Muslim attacks have risen six-fold in the first three months of the year compared with the same period in 2014, hitting 222 reported violent attacks, according to French interior ministry figures. "It is the first time we have recorded grenades being thrown or guns fired," Abdallah Zekri, president of the National Observatory against Islamophobia said, stressing the unprecedented rise in Islamophobic attakcs. Racism, anti-Semitism and Islamophobia prevail in the country as more non-French people have been threatened by potential violent attacks.

"Ever since the establishment of the Observatory in 2011, the number of Islamophobic acts has increased as such actions or threats, especially on social networks," Zekri added, calling the anti-Muslim attacks "simply racism and rejection of men and women who aspire to just be respected."

French media earlier reported that many Muslims have become the target of renewed attacks on venues having religious significance that are owned by the Muslim community. Twenty-six mosques in France have been subject to attack with firebombs and gunfire as of January 14, with a total of 167 reported Islamophobic incidents in January alone compared to just 14 in the same month of 2014. In the aftermath of the deadly attack on the French satirical magazine Charlie Hebdo, Muslims in France have been subject to violent attacks due to an increase in suspicion and negative sentiments toward the French Muslim community. Reports of attacks on mosques and Muslim-run businesses in various places in France have led many French Muslims to fear rising Islamophobia.

The apparent rise in racism and discrimination against immigrant communities in France was condemned by France's Prime Minister Manuel Calls, who announced that the French government would pour 100 million euros into a major anti-racism action plan in order to increase the penalties for crimes deemed to have been fuelled by racism. Apart from Muslims, France's Roma and the French Jewish community, are other minority groups targeted by vigilante attacks and stigmatized by hate speech, facing fear of harassment and discrimination.

France is home to the largest Muslim population in Europe, estimated at between 4-5 million. The French Muslim community represents approximately 6 percent of the total population of the 58.5 million that live in France. However, French Muslims do not feel safe due to the lack of security measures taken by the French government compared to other French communities under threat.

The threat posed by many French militants affiliated with the radical Islamic State of Iraq and al-Sham (ISIS) has led to growing intolerance toward the Muslim community. With the rise of far-right extremism, peace and solidarity has slowly eroded in French society. The misrepresentation of Islam by militant groups like ISIS, al-Qaida, Boko Haram and the Taliban trigger more fear and anti-Muslim sentiments, not only in France, but in many Western countries. As these militant groups have carried out violent attacks and killed many people, people in Europe are more inclined to act violently against Muslims and immigrants while supporting far-right political parties.

Anti-immigration sentiments have long been on the rise in European countries. European attitudes toward minorities living in the EU show that there are considerable negative perceptions of minorities. The negative attitudes are more common among people on the ideological right, paving the way for growing concerns of far-right extremism and Islamophobia in Europe. Far-right principles, anti-immigration, nationalism and Euroscepticism has found significant support from many Europeans over the past few years.
Last Update: Apr 17, 2015 4:50 pm
RELATED TOPICS