Kremlin: ‘US paratroopers in Ukraine may destabilize situation’ 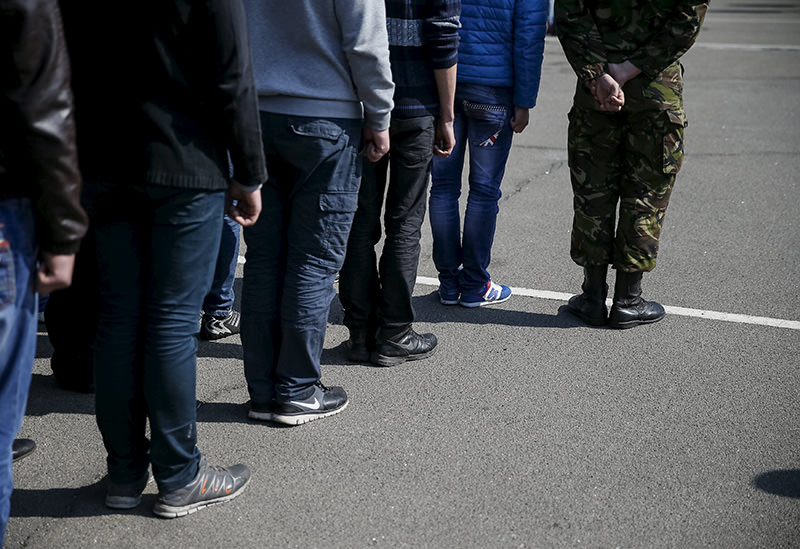 Ukrainian conscripts line up during a ceremony marking the first batch of conscripts in the Ukrainian army at the parade square of a recruitment office in Kiev, April 16, 2015 (Reuters Photo)
by Daily Sabah with Reuters Apr 17, 2015 12:00 am
The Ukrainian government confirmed on Friday that some 300 US soldiers have arrived in Ukraine to train local troops.

The Kremlin said on the same day as the arrival of the paratroopers that they could destabilize the situation in the east of the country, where pro-Russian separatists are fighting Ukrainian government forces.

Ukraine has repeatedly asked for international help to boost its defensive capabilities. Western countries have so far declined its requests to supply weapons, while offering non-lethal military aid and training.

"The participation of instructors or specialists from third countries on Ukrainian territory, where the domestic Ukrainian conflict is unresolved ... could destabilize the situation," Kremlin spokesman Dmitry Peskov told reporters in Moscow during a conference call.

He was referring to the arrival of the U.S. paratroopers in western Ukraine this week to begin a six-month training rotation with three battalions.

Ukraine and the West have accused Russia of interfering in the year-old conflict by sending in troops and weapons. Moscow has denied those charges and warned against excessive Western influence in Ukraine.

The training mission, which was first announced in August last year, had been due to start in March but was put on hold until further progress was made in implementing a ceasefire deal, agreed in February, to end a conflict in which more than 6,100 people have been killed.

The situation on the front line in eastern Ukraine was relatively quiet on Friday, with just one government soldier injured during the past 24 hours, according to the Security Council.
Last Update: Apr 17, 2015 3:48 pm
RELATED TOPICS