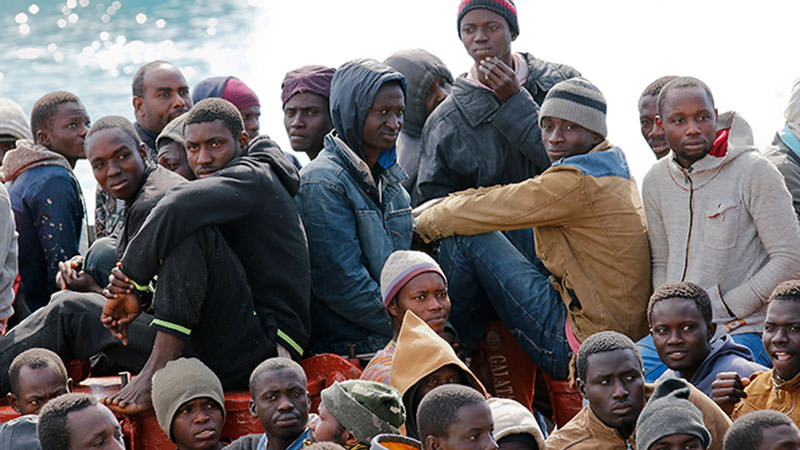 Migrants at the Sicilian harbour of Pozzallo, February 15, 2015 (Reuters Photo)
by Compiled from Wire Services Apr 20, 2015 12:00 am
The European Union should take a "more sophisticated, more courageous and less callous approach" to migrants who often die trying to reach the EU in boats that are not seaworthy, U.N. human rights chief Zeid Ra'ad Al Hussein said on Monday.

"Europe is turning its back on some of the most vulnerable migrants in the world and risks turning the Mediterranean into a vast cemetery," he said, describing EU policy as "short-sighted, short-term political reactions pandering to the xenophobic populist movements that have poisoned public opinion on this issue."

Only a day after Sunday's tragedy, in which more than 700 people are feared to have perished off Libya, another boat with 300 people onboard issued a distress call from the Mediterranean.

German Chancellor Angela Merkel is among those who want Europe to find answers, according to her spokesman. Steffen Seibert told reporters on Monday that Merkel, "like millions of Germans", is appalled by Sunday's capsizing of a fishing boat off Libya in which more than 700 people are feared dead, a few days after hundreds died in another incident.

The victims had "started out -- desperate, perhaps also hopeful -- for Europe, and the fact they now have only found death on the way, that is a tragedy," he said.

"That this is taking place with sad regularity in the Mediterranean, that is a situation not worthy of Europe. A continent which feels committed to humanity must look for answers even when there are no easy answers," he added.

Italian Prime Minister Matteo Renzi, whose country is among those bearing the brunt of the flood of migrants, said Rome was studying the possibility of mounting "targeted interventions" against the Libya-based people smugglers behind the crossings.

Europe's southern shores have been swamped over the past two weeks with migrants fleeing war and hardship, mostly via Libya.