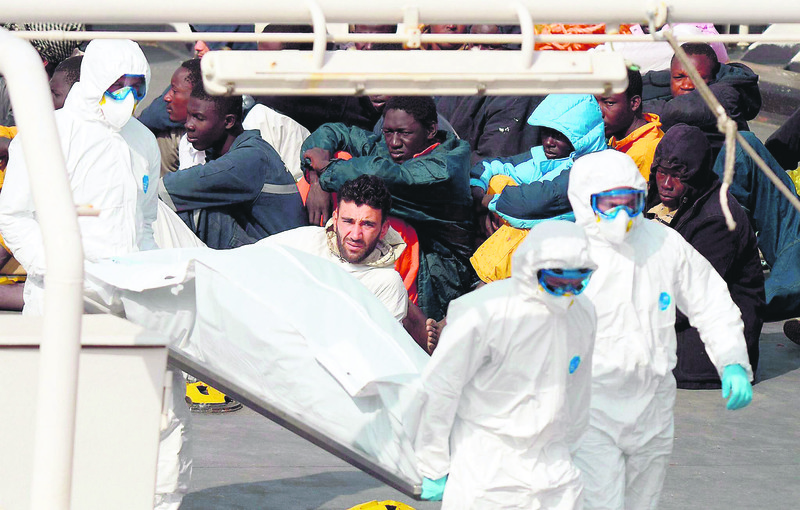 Europe continues to neglect the humanitarian disaster off its coasts as the perilous Mediterranean crossing costs more migrant lives with the death toll in only one week hitting more than 1,500

The reported migrant fatalities in the Mediterranean Sea continue to rise as a boat carrying more than 300 people floating in international waters radioed for help on Monday, according to the International Organization for Migration office in Rome. As of April, the migrant death toll had reached nearly 1,500 at the European borders while European countries face public outrage over the deaths of hundreds of people trying to reach European shores. In order to respond to the rising migrant tragedies at sea, EU bloc foreign ministers met on Monday. Yet, there has been no joint decision agreed by the EU and the delay of taking decisive action by the EU member states has led to more tragedy.

Regarding Sunday's capsizing of a fishing boat off Libya in which more than 700 people are feared dead, German Chancellor Angela Merkel underscored the "appalling" condition of migrants who try to reach European shores. "That this is taking place with sad regularity in the Mediterranean, that is a situation not worthy of Europe. A continent which feels committed to humanity must look for answers even when there are no easy answers," she said, according to AFP.

Amid calls for immediate EU action, an Italian prosecutor investigating human smuggling networks stated that "there are about 1 million migrants on the Libyan coast who are ready to leave for Europe." The huge number of migrants that are ready to set sail to Europe could mean there are more migrant tragedies yet to occur.

"This issue of the deaths of migrants has finally made it to the international radar," said Leonard Doyle, spokesman for the International Office for Migration in Geneva. "We're starting to see people react to the humanitarian aspect of it."

The new EU policy, Operation Triton, for refugees and asylum seekers trying to reach Europe, imposed strict measures on search and rescue operations in the Mediterranean Sea as of November 2014. The rescue operation was heavily criticized when it was implemented because the main focus of the joint EU mission was only to manage border security control to keep the massive number of migrants away from coming to Europe. The latest migrant tragedies shows that existing European mechanisms and operations are not sufficient to reduce the risks and danger and prevent further tragedies at sea while many international human rights groups called for a change on immigration policies and some underscored the need to end Operation Triton. The death toll is much higher than it might have been unless the Italian navy's Mare Nostrum operation had been suspended at the end of last year, according to the aid agencies.

The increasingly violent and chaotic situation in the Middle East has led many people to flee the conflict in an attempt to seek security and shelter in more prosperous and peaceful countries in Europe. Over 218,000 refugees and migrants arrived in Europe via the Mediterranean in 2014, as indicated by the U.N. More than 3,000 people died or went missing in attempts to cross the Mediterranean to reach Europe. These numbers have been gradually increasing as hundreds of immigrants hope to reach the European shores of Italy, Malta, Spain, Greece and Cyprus. Over 35,000 migrants have arrived by boat in southern Europe so far since the beginning of this year, according to figures released by the United Nations refugee agency.
Last Update: Apr 21, 2015 10:29 am
RELATED TOPICS