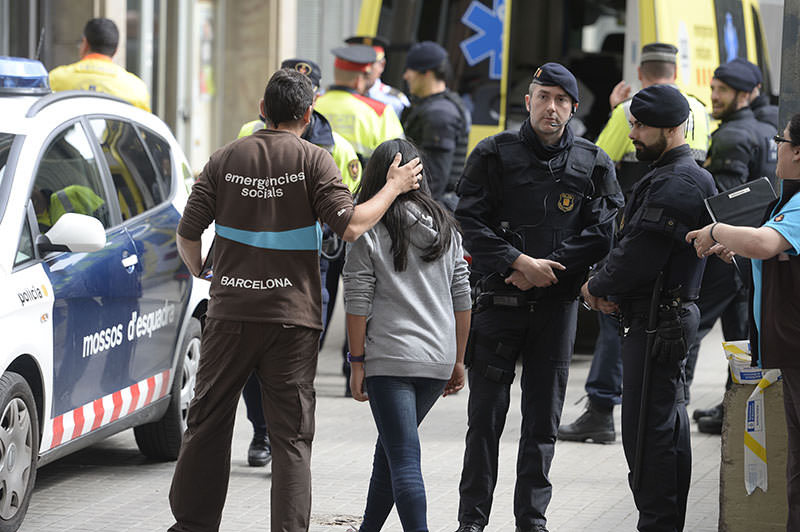 Emergency service members attend students at the Joan Fuste Institue in Barcelona (AFP Photo)
by German Press Agency - DPA Apr 20, 2015 12:00 am
A 13-year-old student wielding a knife and crossbow burst into a school in the Spanish city of Barcelona on Monday morning, stabbing one teacher to death.

Four others were lightly wounded in the attack including two other teachers and two students, police said in a statement. Three of them were taken to a hospital.

The attack began at approximately 9:20 am (0820 GMT) at the Joan Fuster school located in Barcelona's northern Sant Andreu district. The attacker, who witnesses indicated was male, was detained by regional police.

There was no immediately clear motive behind the actions of the boy, who attended the school as a student.

Witnesses told Spanish media that the attacker had knocked on a classroom door and wounding with the crossbow a female teacher who opened the door and a student in the room.

Upon hearing screams, another teacher allegedly entered the room where he was attacked with a knife. That teacher died of his wounds shortly thereafter, regional police said. Earlier reports implied the teacher had been killed with the crossbow.

Witness said the boy then continued on to another classroom, where he attacked another student with a knife.

Students at the school told Spanish media that the boy in the days prior had threatened to kill all of the teachers at the school before committing suicide.