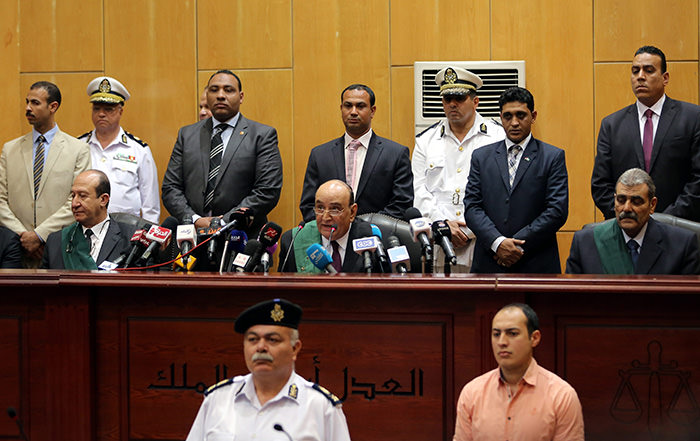 Egyptian judge Ahmed Sabry Yousef (C, on bench) presides over the trial session of ousted president Mohammed Morsi, in Cairo, Egypt, 21 April 2015 (EPA Photo)
by Mehmet Çelik Apr 22, 2015 12:00 am
The Egyptian court's decision on Tuesday to sentence Mohamed Morsi, Egypt's first democratically elected president, to 20 years in prison, has received harsh criticism from international rights groups. The decision to sentence Morsi, who was ousted from power by General Abdel Fattah el-Sissi after a military coup in July 2013, does not follow the principles of justice, Human Rights Watch has said.

"It is disturbing that Morsi and his top aides may have known about the abuse and interrogation of protesters at the gates of his presidential palace, but prosecutors failed to present any evidence that Morsi planned for the clashes or abuse to happen," Sarah Leah Whitson, director of the Middle East and North Africa division at Human Rights Watch, said, according to Anadolu Agency. "That lack of evidence, compounded by serious due process violations and the one-sided failure to investigate those who killed Morsi's supporters, renders the case against the former president an injustice," she said.

Similarly, Amnesty International has released a statement condemning the sentence on Tuesday saying, "The sentencing of Mohamed Morsi to 20 years in prison today is a travesty of justice and demonstrates, once again, that the Egyptian criminal justice system appears to be completely incapable of delivering fair trials for members or supporters of the former president's administration and the Muslim Brotherhood." Hassiba Hadj Sahraoui, Deputy Middle East and North Africa Director at Amnesty International, "This verdict shatters any remaining illusion of independence and impartiality in Egypt's criminal justice system. Convicting Mohamed Morsi, despite fundamental flaws in the legal process and what seems to be at best, flimsy evidence produced in court under a gag order, utterly undermines this verdict."

The U.S. has also "criticized" the Egyptian court's decision to sentence Mohamed Morsi in a statement released by the White House Press Secretary Josh Earnest on Tuesday. "The United States is concerned by these sentences," said Earnest in the press conference. "All Egyptians, regardless of political affiliation, are entitled to equal and fair treatment before the law, including full respect of their rights to due process," he added. "The United States continues to be strongly opposed to politicized arrests and detentions," Earnest said. The U.S. administration had recently lifted a block on military aid to Egypt, a country known for its deteriorating human rights record due to mass trials and sentences that have been widely criticized by international human rights groups. "We made a decision. I think that's what changed," said Marie Harf, a State Department spokeswoman, who refused to comment on why the U.S. lifted the hold put on aid previously, as Egypt's current human rights records have not changed.

Despite the harsh criticism on the verdict from several countries and rights groups, the EU has commented on the verdict, saying that relations between the EU and Egypt will remain stable. "The EU has a strong and constant relation with the Egyptian government on a whole range of issues," said European Commission spokeswoman, Catherine Ray in Brussels on Tuesday. Ray added that the EU is to continue its relations with Egypt saying, "So at this point in time, (the) EU will continue to have this relation with Egypt on different aspects of our relationship."

After el-Sissi took over power, the international community voiced its concern weakly against the human rights violations, mass death sentences, arbitrary detentions and the suppression of all opposition groups by the el-Sissi rule, despite repeated warnings of rights groups. Moreover, the U.S. did not condemn the mass killing of people in Egypt as happened in Rabaa Square in 2013. The systematic and widespread killing of at least 817 demonstrators by Egyptian security forces in July and August 2013 probably amounts to crimes against humanity, Human Rights Watch (HRW) said in a report, released last August.

"In Rabaa Square, Egyptian security forces carried out one of the world's largest killings of demonstrators in a single day in recent history," said Kenneth Roth, executive director of HRW. The Cairo administration shook the world on numerous occasions last year as Egyptian courts sentenced hundreds of people to death and life in prison. A recent report by the Egyptian Center for Economic and Social Rights, a local NGO, said that more than 41,000 Egyptians have been subject to prosecution since Morsi's ousting.

"The death sentences are yet another example of the bias of the Egyptian criminal justice system. These verdicts and sentences must be quashed and all of those convicted should be given a trial that meets international standards of fairness and excludes the death penalty," said Hassiba Hadj Sahraoui, Deputy Middle East and North Africa Program Director at Amnesty International. "The death penalty is a cruel and inhumane punishment in all circumstances. To impose death when there are serious doubts hanging over the fairness of the trial is outrageous and flouts international law," she added. Egypt announced at least 509 death sentences last year. Amnesty International also expressed concern about countries that resumed the practice of executions.