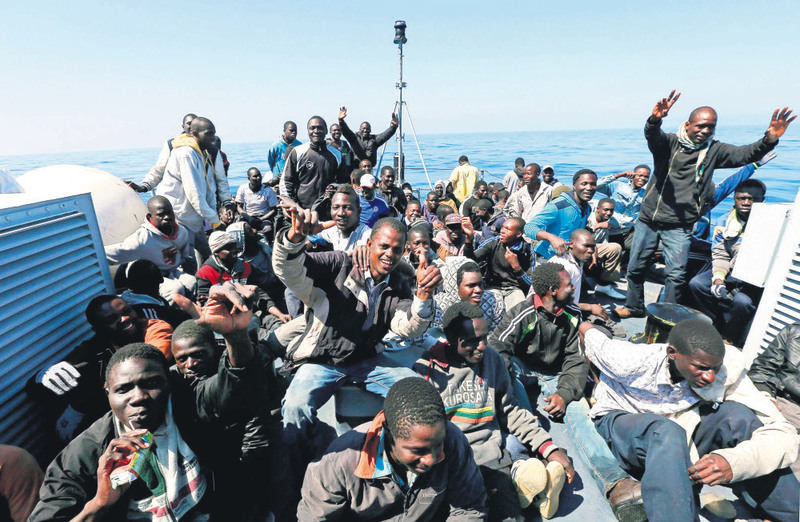 by Compiled from Wire Services Apr 23, 2015 12:00 am
As many as 5,000 migrants a week could arrive in Italy by sea from North African ports in the next five months unless something is done about the issue, according to an interior ministry projection. The figures, published on Thursday by the Rome newspaper Il Messaggero and confirmed by a ministry source, estimated that as many as 200,000 could arrive by the end of this year. Arrivals of migrants usually spike in the spring and summer months because of better weather in the Mediterranean but the situation is expected to worsen because of growing lawlessness and anarchy in Libya, from where most of the migrants depart. Up to 900 people were feared dead after their boat sank on its way to Europe from Libya at the weekend including many women and children locked below deck, prompting calls for joint action to stop the flow of migrants fleeing war and hardship in Africa. The deaths, in what appears to have been the worst disaster ever among migrants fleeing by sea to Europe from north Africa, caused shock in Europe where a decision to scale back naval operations last year seems to have increased the risks for migrants without reducing their numbers. Italy shut down its "Mare Nostrum" mission that was credited with saving the lives of more than 100,000 migrants last year because other EU countries refused to pay for it. It was replaced with a smaller EU scheme whose main focus is to patrol the bloc's borders, after some countries argued saving migrants encouraged more to come. Some 1,800 migrants are reported to have died in the Mediterranean so far this year compared to fewer than 100 in the first four months of last year, according to the U.N. refugee agency.

EU leaders at an emergency summit in Brussels on Thursday were expected to reverse that decision. In Malta on Thursday morning, an inter-religious service was held for 24 victims of the disaster. It was attended by Italian Interior Minister Angelino Alfano. Two men, a Syrian and a Tunisian, were arrested in connection with the weekend disaster on suspicion of multiple homicide, people smuggling and causing a shipwreck. As more migrants rescued in recent days arrived at Italian ports aboard military vessels on Thursday morning, police in Siracusa, Sicily, said eight Egyptian men had been detained on suspicion of human trafficking.

The group controlling Libya's coastal capital Tripoli said it would "confront" any unilateral European Union moves to attack sites used by people-traffickers, urging the bloc to consult it over plans to deal with a migration crisis. Muhammed el-Ghirani, foreign minister of the group that is a rival to Libya's internationally-recognized government, said it had repeatedly offered to help deal with migrants leaving its shores, but its proposals had been rebuffed. His comments, made in an interview with the Times of Malta published on Thursday, underlined the challenges facing EU ministers meeting in Brussels to find ways to stem the numbers risking their lives travelling from Libya, a country mired in political chaos. At a summit hastily convened after nearly 2,000 migrants at sea, EU ministers are expected to discuss one proposal to launch military and civilian missions to capture and destroy the traffickers' boats, diplomats said. "You cannot just decide to hit. Let's say you strike a particular site. How will you know that you did not hit an innocent person, a fisherman? Does Europe have pinpoint accuracy? So we are saying, 'Let's do this together,'" Ghirani told the Maltese newspaper. "We have been doing our best to get Europe to cooperate with us to deal with illegal immigration but they keep telling us we're not the internationally recognized government. Now they cannot just decide to take this action. They have to speak to us," he added. He said any unilateral attacks would be confronted, the newspaper reported, without going into further details.

European Union leaders gathering for an extraordinary summit are facing calls from all sides to take emergency action to save lives in the Mediterranean. The leaders will examine a plan to respond to the crisis, after more than 10,000 migrants were plucked from seas between Italy and Libya in a week, and are widely expected to approve swift action. EU President Donald Tusk urged the leaders from the 28 nations "to agree on very practical measures," including "strengthening search-and-rescue possibilities, by fighting the smugglers and by discouraging their victims from putting their life at risk, while reinforcing solidarity." EU officials say the leaders will commit to doubling the size of the European border agency effort in the Mediterranean, but those operations are designed for monitoring migrant movements, not necessarily saving lives. A senior EU official said they are also expected to give the green light for a pilot project to resettle around 5,000 refugees. The official, who is involved in preparing Thursday's summit in Brussels, is not permitted to speak publicly. That resettlement plan would amount to about half of those who have arrived in just the last week and a tiny fraction of the hundreds of thousands likely to arrive this year.

Amnesty International and Doctors Without Borders want a multinational rescue effort launched to help the thousands fleeing conflict and poverty from places like Syria, Eritrea and Somalia. "The stakes are very high. The number of hours, literally, that it takes to take action will make the difference between life and death," Iverna McGowan, Acting Director of Amnesty's European Institutions Office told The Associated Press.
Last Update: Apr 23, 2015 11:15 pm
RELATED TOPICS