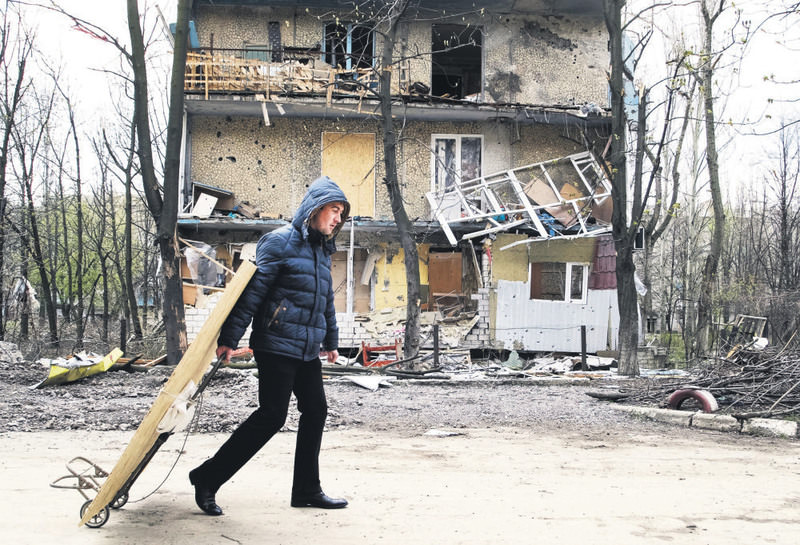 Ukraine has been dragged into a civil war as Russia backs separatist groups while the U.S. supports the Kiev government.
by Begüm Tunakan Apr 23, 2015 12:00 am

The Ukrainian crisis is not the only problem between Western powers and Russia, as a possible conflict with Russia over oil fields in Arctic regions could threaten a new Cold War

Following the deepening rift between Russia and Western powers over the Ukrainian crisis, Arctic territories could possibly become a new area of conflict in the already-deteriorated relationship between the West and Russia. Senior envoys from the countries of the Arctic Council, which includes Russia, met on Thursday in the Canadian arctic city of Iqaluit, off the southern coast of Baffin Island, chaired by the U.S.

Ahead of the meeting, cooperation with Russia in the Arctic has generally held, as countries with territories in the Arctic avoid risking military conflict around the North Pole with Russia. Despite tensions over Ukraine, "there is a huge desire for cooperation in the Arctic," Sara French, senior policy analyst at the Gordon Foundation in Canada told Reuters.

Regarding newly assertive Russian policies in Arctic regions, the Russian Ministry of Defense stressed that the country would "enhance the safety of the Northern Sea Route's traffic and respond in a timely manner to potential military threats in the area," in February. In order to challenge alleged security threats, Russia announced military troop deployment on the Chukotka peninsula, across the Bering Strait from Alaska, in order to provide safety to the Northern Sea Route as a challenge to Western countries in the Arctic region.

The Arctic is very rich in mineral resources and is an area of land and sea that is mostly covered in ice. The area covers 20 to 30 million square kilometers and is believed to hold 30 percent of the world's undiscovered natural gas and one-seventh of its untapped oil reserves.

The Arctic Council is composed of eight member countries with arctic territory: Russia, Canada, the U.S, Denmark (Greenland), Norway, Iceland, Sweden and Finland as well as Germany, China and India with observer status. The Arctic Council aims to assess the threats of climate change and its effects on living conditions in the region around the North Pole and new opportunities to open ocean trade routes and offshore oil fields.

After the annexation of Ukraine's Crimea by Russia in March, there has been growing fear among northern European countries that the Cold War years could be making a return. Regarding Russia's increased militarization of rebel-held areas in the Ukrainian Donbass region in the country's east and its explicit support of pro-Russian separatists who are seeking regional leadership close to Russia, have prompted fears among Western countries. As tension between Russia and the West intensifies, the ex-Soviet Baltic states and Scandinavian countries see Russia as a clear threat to their national security and territorial integrity.

Meanwhile, as the shaky situation in eastern Ukraine remains with the U.S. and Russia continuing to accuse each other of a military presence violating the Minsk Agreement. Washington, along with European countries has accused Russia of violating the cease-fire agreement, saying that Russia would face additional sanctions if it continues to provide support to rebels in eastern Ukraine. The unwillingness of Russian President Vladimir Putin to implement the Minsk Protocols by backing separatist groups has long been criticized by the administration of U.S. President Barack Obama. The Russian Ministry of Foreign Affairs has also said that the U.S. military presence in Ukraine violates the cease-fire agreement as reported by the Russian state-run Itar-Tass news agency.

Since clashes erupted in eastern Ukraine, more than two million Ukrainians have been forcibly displaced due to worsening humanitarian conditions in rebel-held areas where heavy fighting has turned eastern Ukraine into a battle zone. According to U.N. figures, more than 6,000 people have been killed during heavy clashes between armed groups since the hostilities erupted in late March.
Last Update: Apr 24, 2015 10:56 am
RELATED TOPICS