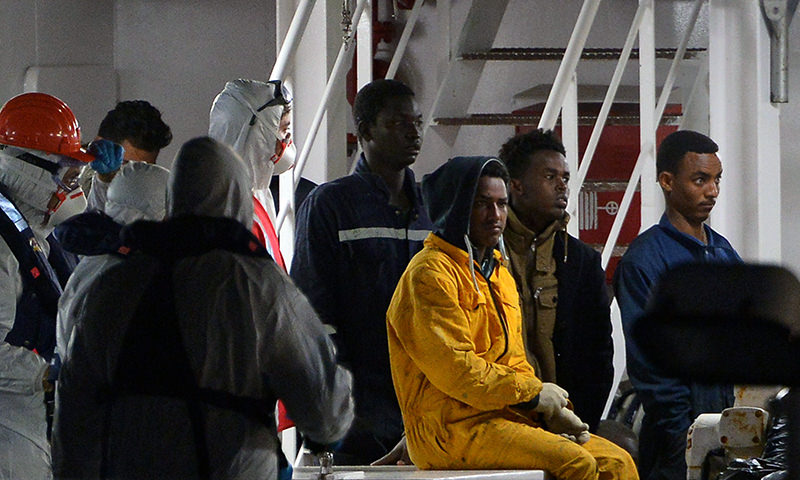 | AFP Photo
by French Press Agency - AFP Apr 25, 2015 12:00 am
UN Secretary General Ban Ki-moon, Italian Prime Minister Matteo Renzi and EU foreign policy chief Federica Mogherini will on Monday board a vessel in the Mediterranean Sea to show their "solidarity" after a series of boat migrant tragedies, the EU said.

The trio will set sail on an Italian navy ship off the coast of Sicily "to assess the situation and help ensure European solidarity for the efforts undertaken to save the lives of migrants crossing the Mediterranean Sea", the EU's diplomatic arm said in a statement on Saturday.

No further details about the trip were given.

The highly symbolic sea journey will come just over a week after more than 750 migrants died in shipwreck off the coast of Libya, in the Mediterranean's worst migrant disaster yet.

In its statement, the EU stressed "the need for a common effort to address the issue of migration, from tackling root causes to facing the emergencies".

Under pressure to deal with a spike in the number of migrants undertaking the perilous journey to reach European shores, EU leaders held emergency talks on Thursday during which they decided to triple funding for the bloc's maritime search and rescue operation.

The bloc also wants United Nations approval for an EU military operation against the people smugglers, with Britain and France set to demand a UN Security Council resolution to take action in Libyan territorial waters.

The EU's Mogherini will use a visit to New York next week to meet key actors at the UN on the issue.

On Wednesday, she will hold talks in Washington with US Secretary of State John Kerry.