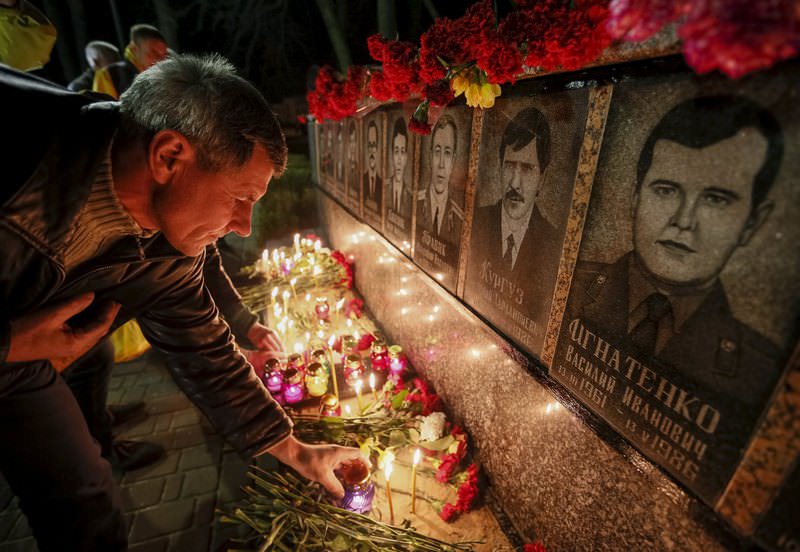 A man lights candles at a memorial, dedicated to firefighters and workers who died after the Chernobyl nuclear disaster, during a night service near the Chernobyl plant in the city of Slavutych, Ukraine (Reuters Photo)
by French Press Agency - AFP Apr 26, 2015 12:00 am
Ukraine marked 29 years since the Chernobyl nuclear disaster on Sunday, placing flowers and laying candles at the foot of a monument in Slavutych, a town 50 kilometres (30 miles) from the plant. The remembrance took place in the dark at 1:23 am, the exact time of the explosion.

Slavutych was built to rehouse Chernobyl workers who had lived near the plant and were forced to move further away after the disaster.

At the site of the plant itself, around 100 kilometres from Kiev, Ukraine's President Poroshenko laid a wreath on Sunday at a monument to the victims.

The human toll of the disaster is still disputed.

United Nations experts officially recognize that 31 deaths of plant workers and firefighters occurred directly as a result of the blast.
But environmental group Greenpeace predicted that there would be around 100,000 additional cancer deaths caused by the disaster.

The Soviet authorities of the time dispatched hundreds of thousands of people to put out the fire and clean the site, without proper protection.

They hastily laid over the reactor site a concrete cover dubbed "the sarcophagus", which is now cracking and must be replaced.
On Sunday, President Poroshenko inspected ongoing work to lay a new 20,000-tonne steel cover - a project estimated to cost more than two billion euros ($2.2 billion).

It is financed by international donations managed by the European Bank for Reconstruction and Development (EBRD).

The structure will contain technology that will act beneath the cover to decontaminate the area once the steel layer is in place. Officials say the new cover will last for 100 years.

Poroshenko said the new cover would "protect forever" against radiation from the site.

The work had been scheduled for completion by the end of this year but the EBRD said last year technical problems would delay it until late 2017.
Last Update: Apr 26, 2015 4:06 pm
RELATED TOPICS