Anti-racism group calls on UN to examine murder of Turks, racism in Germany 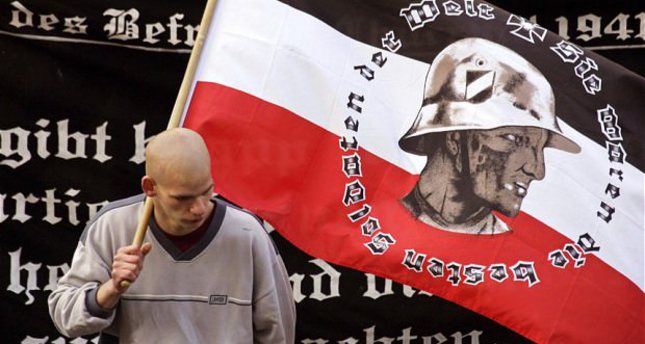 by Anadolu Agency Apr 27, 2015 12:00 am
A group of anti-racism experts has called on the United Nations to examine the unresolved murder cases carried out by the neo-Nazi terror cell, NSU, and rampant institutional racism in Germany.

In a report submitted to the UN's anti-racism body on Monday, around 80 prominent experts, lawyers, scholars and nongovernmental organizations criticized German authorities for not fully investigating the racist murders carried out allegedly by the NSU. They also accused authorities of not taking adequate measures against alleged institutional racism in bureaucracy, police and domestic intelligence agency.

Lawyer Carsten Ilius, who represented the victims' families at the NSU trial and also contributed to the report, blamed German security organizations for hiding information from the court and blocking a deeper investigation into the NSU murder cases.

"By our report to the UN Committee on the Elimination of Racial Discrimination, we are now seeking the support of international institutions for our efforts to resolve these murders and reveal the possible role of security organizations," Ilius told the Anadolu Agency in Berlin.

Ilius hoped that the report's recommendations would be taken into account next week, when the UN's anti-racism body, the Committee on the Elimination of Racial Discrimination, will review the human rights record of Germany.

The periodic review of Germany will take place in Geneva from May 5 to 6.

German anti-racism experts and activists called on the UN's anti-racism body to assign its special rapporteur with examining the unresolved NSU murders and racism in Germany.

"The UN special rapporteur is requested to compile a report about the NSU-complex and to examine the issue of individual and institutional racism as it concerns the investigations and the work of the Verfassungsschutz (domestic intelligence) agencies," the report said.

The National Socialist Underground group, or NSU, killed at least eight Turkish immigrants, a Greek worker and a German policewoman between 2000 and 2007, all apparently without arousing the suspicions of the German police or its intelligence services.

The German public first learned about the NSU and its role in the murders in November 2011, when two members of the group reportedly died in a murder-suicide following an unsuccessful bank robbery. A third member of the NSU, Beate Zchaepe, is currently under arrest, but remains silent.

Until 2011, Germany's police and intelligence service excluded any racial motive for the murders and instead treated immigrant families as suspects with alleged connections to mafia groups and drug traffickers.

Some recent revelations unveiled ties between the far-right extremists and the informants of the domestic intelligence agency. But German authorities denied there have been any relationships between its agents and the NSU murders.

Markus Loening, Germany's former human rights commissioner and a contributor to the report, said that majority of Germans continue to ignore problems of racism, even after the NSU murders.

"We have never acknowledged that do we have a problem with racism because German history has been so badly abused. But we need to address it. We do have a racism problem," he told the Anadolu Agency.

Loening said that it was important for German politicians and bureaucracy to focus on genuine measures to change culture in security institutions, to fight discrimination and stereotypes about immigrants.

"There is institutional racism; but the government did not want to see it. That needs to change. We need a different culture in institutions, and in law enforcement," he said.

He said that independent ombudsperson services should be established at the state and federal levels for the victims of discrimination, racist practices and violence.

He also backed the proposal of UN special rapporteur's examination of Germany.

"When I was presenting the periodic review for Germany in the UN Human Rights Council about two years ago, the feedback I got from other states was that we do have a racism problem in Germany. That was the biggest problem as people saw it from the outside," he said.

"So very obviously the view from the outside is a different one than the view from the inside. So, special report by the UN Special Rapporteur on racism could be helpful to get the debate going on in Germany. And he will certainly have a view from the outside, which is helpful. We should ask him to do it, and then take up his criticisms, his points, and debate them," he said.
Last Update: Apr 28, 2015 10:37 am
RELATED TOPICS