Mistral ships may be scuttled in open sea 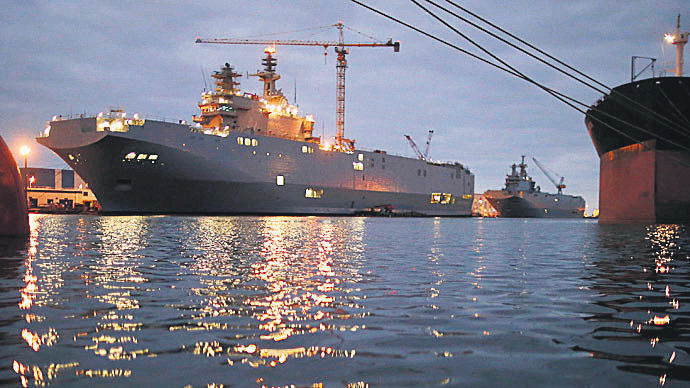 by Daily Sabah May 06, 2015 12:00 am
France is allegedly considering deliberately sinking the two helicopter carriers built for the Russia navy in open sea as the unsettled dispute between Russia and France has reached an impasse, French media reported. The two helicopter carriers "will be either dismantled and utilized or scuttled in the open sea," the French newspaper, Le Figaro reported on Tuesday. The French newspaper reported that the possibility of delivery of the Mistral warships is "almost dead," as the dispute also "poison" the diplomatic relations between the two countries. If France decides to terminate the Mistral deal with Russia, it might be subject to a heavy fine and would face a huge bill that would hurt its already-damaged economy. The refund option is on the French government's agenda.

French President François Hollande earlier stated that France would reimburse Russia if it fails to deliver the two Mistral warships in a deal frozen over the Ukraine conflict. However, there is no substantial conclusion over how the Mistral warship dispute will end as the final outcome of the deal is still up in the air.

The 1.12-billion-euro contract for building two Mistral-type ships was signed by the Russian defense exporting company Rosoboronexport and DCNS, a French industrial group specializing in naval defense and energy, in June 2014. The 21,300-ton Mistral-class ship can carry up to 16 helicopters, four landing crafts, 13 tanks and over 400 soldiers. One of the two Mistral-class ships, named the Vladivostok, was to be handed over in mid-November to Russia. However, France decided to delay the delivery of the first warship due to concerns over Moscow's role in the crisis in eastern Ukraine. The second ship, the Sevastopol, is due for delivery late this year. No progress has been made so far over the Mistral dispute between France and Russia.

The Mistral dispute is seemingly continuing to damage France's diplomatic relations with Russia. Military cooperation with Russia would have inevitably had a huge impact on the French economy. It would appear that the deteriorating bilateral relations with Russia could be costly for France, which suffers from a stagnant economy and the EU-led austerity measures of Hollande's socialist government.

Amid tough Western sanctions on Russia over the Ukraine crisis, France's military cooperation with Russia encountered heavy criticism from Western countries. The EU has imposed a package of significant restrictive measures on Russia, including freezing assets, travel bans, an arms embargo and hard-hitting sanctions aimed at hitting Russian gas and oil. Despite the West's joint decision on Russian sanctions, many Western countries would likely be divided over tightened sanctions due to the fear of damaging their own economies, as many European countries are reliant on Russian gas.
Last Update: May 06, 2015 9:39 pm
RELATED TOPICS