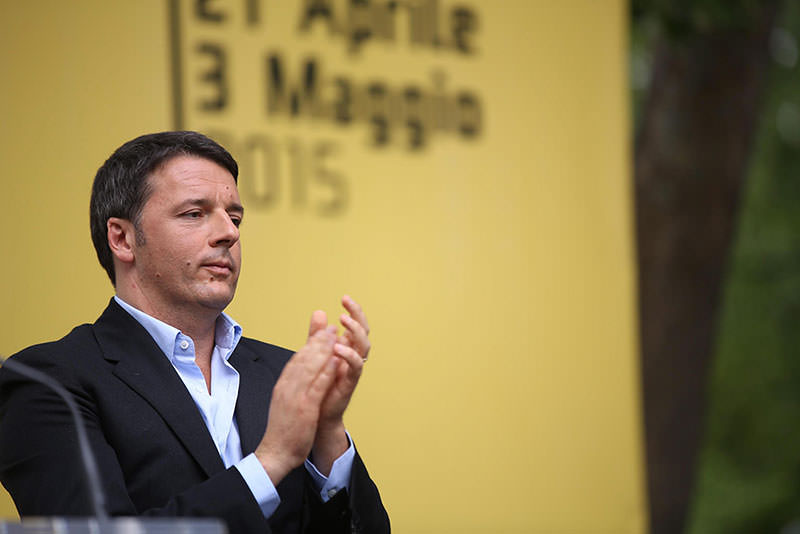 Italian Prime Minister Matteo Renzi delivers a speech during for an event of his party Partito Democratico (PD, Democratic Party) in Bologna, Italy, 03 May 2015 (EPA Photo)
by Daily Sabah with Reuters May 06, 2015 12:00 am

Italy's new electoral system approved in parliament on Monday (dubbed Italicum) is expected to end Italy's decades-long coalition chaos. As per the new law, the party which gains at least 40 percent of the total votes wil be the ruling party in power, after automatically being given a winner's bonus which will give it 340 seats in the 630-seat Chamber of Deputies. The party will thereby be granted an automatic 55-per-cent majority to election winners.

"There will be a system in which our country will finally be a point of reference for political stability which is a precondition for economic and cultural development," Renzi said on Monday.

Renzi said Italy, one of the world's slowest growing economies, has had 63 governments since World War Two but that none had been strong or durable enough to push through core reforms, despite wide recognition that change was needed.

According to the law, parties that get less than 3 percent of the vote will be excluded from the parliament, and if no party wins 40 percent, a run-off ballot between the two largest parties will be held two weeks after the first election to determine which party gets the winner's bonus.

Until 2002, Turkey was not unfamiliar with the multi-party coalition government, which had led to serious political and economic instabilities. However, with the AK Party's coming into power in 2002, the decades-long trend has changed. The AK Pary won 363 parliamentary seats with just 34.3 percent of the votes in that year.