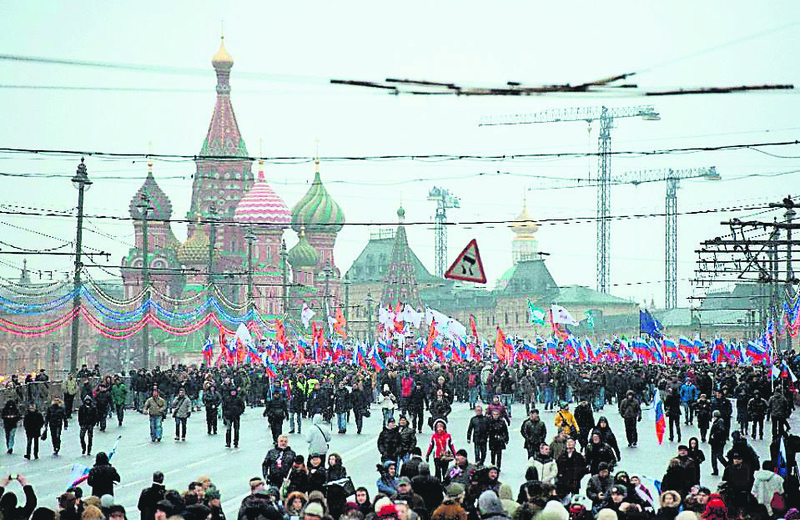 Russian opposition supporters march in memory of murdered Kremlin critic Boris Nemtsov in central Moscow.
by Daily Sabah with AFP May 07, 2015 12:00 am

Ahead of the 2016 Russian elections, the political atmosphere in the country is becoming bitter, as opposition groups face a tough choice over leaving the country or facing repression

As the controversial Russian election approaches, Russian opposition groups are facing a bitter and repressive political environment. Following the killing of the prominent Russian opposition leader Boris Nemtsov on Feb. 27, six opposition parties and two other movements united into the Democratic Coalition, in order to challenge the ruling United Russia party ahead of Russia's 2016 elections. The killing of Nemtsov was related to Russia's assertive policies in the Ukraine crisis. The Ukrainian President Petro Poroshenko blamed the Kremlin for Nemtsov's death, claiming that Nemtsov was preparing to publicly share a report at Sunday's opposition rally that disturbed Russian authorities. "Somebody was afraid of this, Boris wasn't afraid. The killers and executors were afraid," the Ukrainian president said, referring to the report Nemtsov had been working on, detailing the presence of Russian troops in Ukraine, a claim the Kremlin strictly denies.

Tensions with the West over Ukraine and the takeover of Crimea have increasingly polarized Russian society, with most Russians behind Putin, but with a minority in sharp disagreement. Russian opposition political parties, backing a pro-Western stance, condemn Moscow's stance on the Ukraine crisis.

The Moscow government, which has adopted an increasingly belligerent anti-Western and anti-Ukrainian rhetoric, is widely criticized by opposition groups. "Media pluralism and the space for the expression of dissenting views shrank markedly. Restrictions on the rights to freedom of expression, assembly and association, introduced in 2012, were assiduously enforced and further added to. Some NGOs faced harassment, public smear campaigns and pressure to register as 'foreign agents.' Several protesters and civil society activists were convicted following unfair, politically motivated trials. Torture and other ill-treatment continued to be used with impunity," Amnesty International revealed in their annual report on Russia over 2014 and 2015.

The clampdown on demonstrations is seen by observers as the latest example of what they call a concerted official campaign to stamp out any voices that might be seen to question the Kremlin's tight grip. It is in this atmosphere that many opposition activists and liberal-minded Russians are choosing to vote with their feet and leave their homeland rather than stay and risk prison or worse.

Yevgenia Chirikova, who mounted a high-profile campaign against the construction of a highway through a forest near Moscow in 2011, said she had left Russia for Estonia last month fearing she may lose custody of her children in an intensive crackdown. She followed in the footsteps of many others including prominent liberal-minded journalist Galina Timchenko, music critic Artemy Troitsky and Ivan Ninenko, former deputy head of Transparency International in Russia.

"These and many other amazing people left the country over these past years, as the environment has grown increasingly more suffocating and hostile," wrote Tanya Lokshina, Russia program director at Human Rights Watch. "This exodus is a loss for Russia. These people were in fact Russia's future, the future stolen from the Russian society by the powers that be."
Last Update: May 07, 2015 11:02 pm
RELATED TOPICS