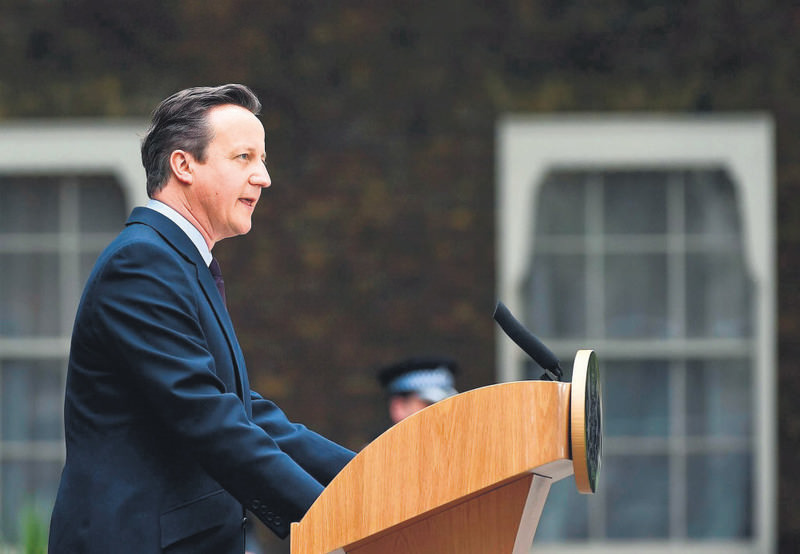 Britain's prime minister and leader of the Conservative Party, David Cameron, addresses the nation outside 10 Downing Street in London on May 8.
by Daily Sabah with Wires May 08, 2015 12:00 am

As Conservatives remain in power, Britain's Thursday elections show that the controversial British electoral system favors political stability over justice, as the smaller parties cannot get seats in proportion to the votes they win

Britain's Prime Minister David Cameron won a stunning election victory in Britain, overturning poll predictions that the vote would be the closest in decades to sweep easily into office for another five years. Meanwhile, Labour, Liberal and UKIP leaders called it quits after the stunning defeat.

British Prime Minister David Cameron's Conservative party on Friday won a majority in the House of Commons in the general election, as election result shows that the Tories will run the House of Commons for the next five years, this time without the need for a coalition by securing the 326 seats required for a majority in the 650-seat chamber. The British election result reveals the prevailing political stability in the country. Yet, the electoral system called "first-past-the-post" disallows other parties to win seats in parliament in proportion to the amount they received votes.

The unexpected level of success has left Labour and the Liberal Democrats devastated in what many observers said was the biggest surprise in a general election since 1945. The main opposition Labour party won 30.5 percent of the votes and 230 seats. Ed Miliband, the leader of the Labour Party, said: "This has clearly been a very disappointing and difficult night for the Labour party." He stepped down on Friday saying that "Britain needs a strong Labour Party. It's time for someone else to take leadership of this party," in his resignation speech on Friday.

These results show the electoral system was able to stop the far-right UKIP to be represented at the British parliament in proportion with the votes it gets. Despite the increasing support for smaller parties, the electoral system gives priority to achiving stability during the formation of the government, paving the way to the two party systems.

The UKIP leader Nigel Farage has resigned as leader of the eurosceptic U.K. Independence Party after failing to get elected to the British parliament. Farage, who had stood in the South Thanet constituency, had previously promised to resign "in 10 minutes" if he failed to get elected, and in his resignation speech said he was a "man of my word." "There's a bit of me that's disappointed but there's a bit of me that's happier than I've felt in many, many years," he said. The seat was won by the Conservative Party's Craig MacKinlay, who beat Farage into second place.

The growing concern over the increasing number of immigrants living in the country has led to an increase in votes for the anti-EU and anti-immigration far-right UKIP party over the past year. The border control and security issue is placed at the heart of electoral campaigns, as the recent opinion polls show that there is a steady increase in support for UKIP.

The controversial British electoral system has long been discussed. Critics say that the first-past-the-post serves only big parties, creating a two-party system. Those who vote for small parties do not get representation in parliament in proportion to the votes they get. In the 2011 U.K. referendum on the change in voting system used to elect MPs, 67.9 percent of the votes said 'No' to change in the electoral system.
Last Update: May 10, 2015 4:54 pm
RELATED TOPICS