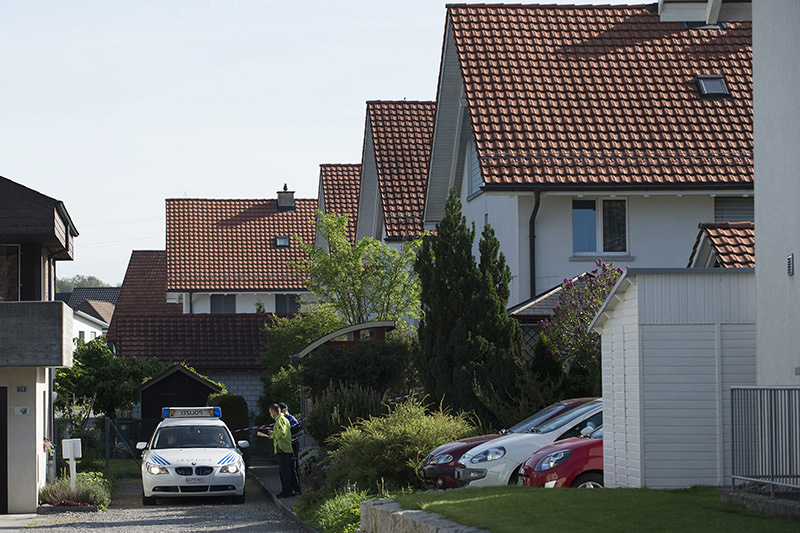 A Swiss police car parked up following the fatal shootings in Wuerenlingen, Switzerland 10 May 2015 (EPA Photo)
by Daily Sabah with AP May 10, 2015 12:00 am
Five people have been killed in a shooting in northern Switzerland, which may have resulted from a family dispute, police said on Sunday.

Residents heard shots in the small town of Wuerenlingen, northwest of Zurich shortly after 11 p.m. on Saturday, leading police to find five bodies in a residential neighborhood.

The shooting appears to have been a "relationship crime," Aargau canton (state) police chief Michael Leupold told reporters, adding that investigators had ruled out any links to terrorism.

The suspected gunman killed three people - a 57-year-old man, a 59-year-old woman and a 31-year-old man inside a house, police said. As he walked toward his car, he then shot and killed a neighbor before shooting himself.

The victims in the house were the parents-in-law and brother-in-law of the suspected gunman, a 36-year-old who lived in Schwyz canton, south of Zurich, and was reportedly separated from his wife. All were Swiss.

It wasn't clear whether the gunman knew the neighbor, a 45-year-old man, and the exact motive for the slayings also remains unclear.

Police said the gunman used a pistol that was not an army weapon. Switzerland has a long-standing tradition of men keeping their military rifles after their compulsory military service.
Last Update: May 10, 2015 6:18 pm
RELATED TOPICS