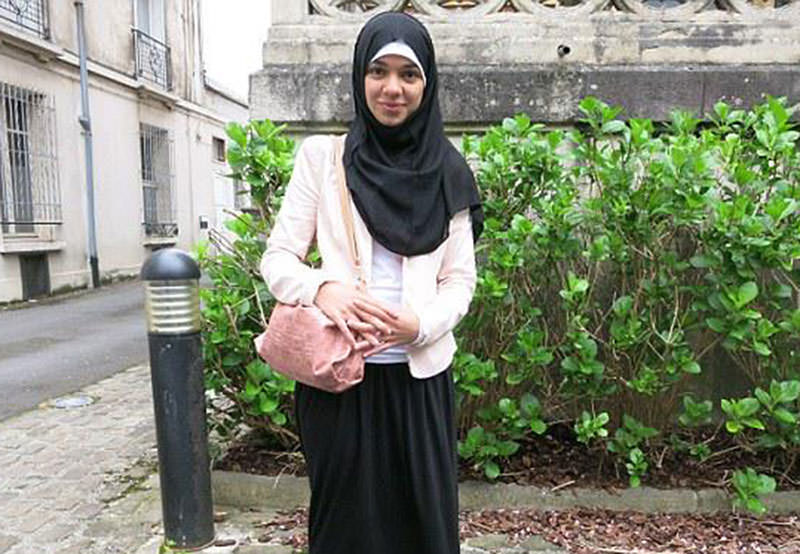 | Photo taken from Twitter
by Anadolu Agency
May 12, 2015 12:00 am
Sarah K, the 15-year-old school girl who was banned from attending classes for wearing long skirts, sparking an uproar in France and the world over, has returned to school in her characteristic outfit.

Sarah stepped into the Leo Lagrange junior-high school in northeastern France Monday, wearing a grey floral printed skirt, confident as ever that her skirt choices had nothing to do with the business of the state.

Last month, the French Muslim student of Algerian descent had been suspended from school by the headmaster, Maryse Dubois, for wearing a similar long skirt and was asked to change her outfit and then come back to school.

In the letter sent to her family, Dubois had said that Sarah's long black skirt allegedly reflected her religious beliefs and breached the strict secular rules of France. The headmaster further said that the skirt was "too openly religious."

Speaking with the Anadolu Agency Monday while she was on her way to school, Sarah said: "I did nothing wrong, I'm respecting the law as I always take off my headscarf before I enter the school; so there is no need for me to change what I wear. I'll continue to dress the way I please and receive my education."

While Sarah was not denied entry to the school this time on Monday, it didn't necessarily mean that the discrimination that girls like her face had come to an end in France. Anadolu Agency has learnt that there are several other girls like Sarah, who too had been suspended at the same school for wearing long skirts.

When Muslim girls like Sarah take off their headscarves before entering school, they in fact comply with the 2004 French law that bans students from wearing any "conspicuous signs" of religion, such as headscarves, skullcaps or crucifixes at schools.

When asked why Muslim girls were being targeted while their non-Muslim students did not face similar discrimination at the school, the headmaster refused to give a comment to Anadolu Agency.

French Minister of Education Najat Vallaud-Belkacem had backed the school's decision to sending Sarah home to change her outfit, denying that it was based on "the length or color of the student's skirt."

Instead Vallaud-Belkacem told the French radio RTL on April 30 that the decision was based on the student's "behavior," something that Sarah's family strongly denied.

"That's not true. There is nothing wrong with my daughter's behavior, and even the letter that we received [from the school] mentions clearly that Sarah was sent home because of the way she dressed," Sarah' s mother Ourida told Anadolu Agency Monday.

The mother said that the school headmaster's attitude changed only after the episode of discrimination went viral globally. She added that the family was later contacted by the school, asking them to meet in the presence of an inspector from the ministry.

"The decision of the school was based on discrimination; it was made on the basis that my daughter is a Muslim," Ourida added.

"From now on, I won't attend any meeting without the presence of a lawyer, as they (school administration and ministry of education) keep changing facts," she added.

Many people in France and abroad agree that Sarah's case was an issue of discrimination and not a case of unruly behavior by a school student as alleged.

Ahmed Nadi, 46, a local dentist of Moroccan origin, said: "It is nonsense. I don't see how a simple skirt could be considered a religious symbol. Any girl from any religious background could have worn it, but since this girl is a Muslim, it is being declared as against secularism of the country," he said.

"I consider myself a secular, my daughter does not wear a scarf, but this is about having the freedom to choose to dress the way you desire," he added.

Mongi, a 38-year-old teacher, who was sitting next to Nadi, said: "This is really alarming. Where are we going with this madness in France? Day-by-day Muslim rights here are being narrowed down; today the problem is a long skirt, tomorrow it can be shirts with sleeves, and (I wonder) what next?"

Thalia, 42, an owner of a local bar in the city, said that the incident had become the talk of the town for days.

"The majority of the people here are against this decision. We can't understand how a teenager can be deprived of her right to receive education just because she put on a long skirt," she said.

"It is really illogical, I can't find any other words to describe the situation," she added.