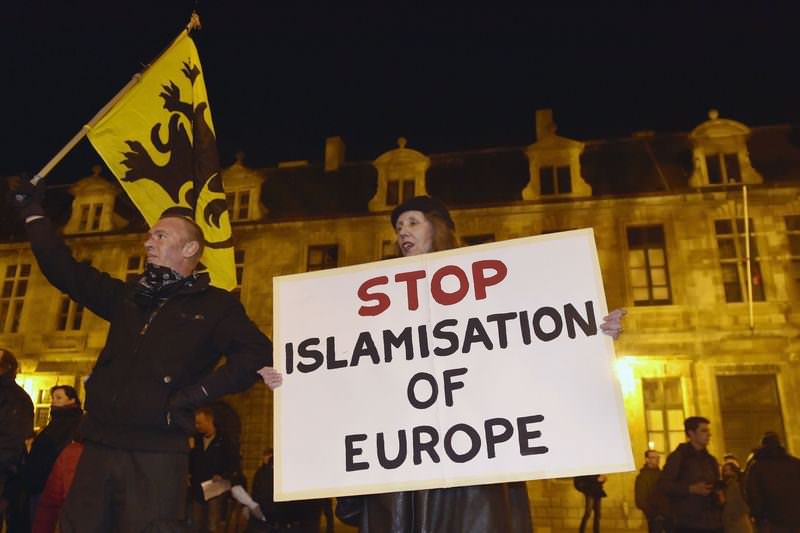 by Daily Sabah with AA May 12, 2015 12:00 am
A report entitled "Hatred, Islamophobia and Racism in Europe", published by the International Center for Watching Violation of Rights (UHİM), has revealed the rising xenophobia against Muslims in Europe.

According to the report, segregation, hate speech and violent attacks which Muslims face in the West are considered to be outcomes of Islamophobia, but this term, which means "Fear of Islam", does not adequately represent the reality since violence towards Muslims is based on hostility rather than fear.

The Head of the Center, Ayhan Küçük, read a decleration regarding the report on Tuesday, in a meeting organized in Bağlarbaşı Congress and Cultural Center in Üsküdar.

Küçük said that the main objective of the report was to analyse discrimination against Muslim immigrants in Europe.

"Foreigners have negligible political representation in European countries in terms of their population. Legislative regulations regarding foreigners are insufficient, biased and prejudiced.

Discrimination, hate speech, segregation and physical attacks against Muslims are usually considered to be consequences of the rising Islamophobia in Europe. However, this term, meaning "fear of Islam", does not reflect the reality. We can easily say that violence against Muslims is based on hostility, not fear.

"Segregation against foreigners in education commences in preschool and results in painful incidents. Double standards are applied in the education system, especially in the most important years that will shape the academic life of the children," he added.

Küçük further explained that discrimination affects the daily life of Muslims in Europe, and they have difficulties in every aspect of life. He added that Muslims have difficulties in renting a house, or they are fired because of their beards, that Muslims' job applications are not considered because of their names, that school directorates prevent Muslim students' parents from attending organizations, and that hijabi woman have problems when they try to register for a sports complex.

Küçük said that the popularity of racist political speech has helped racist and xenophobic political parties emerge in several European countries like Austria, Italy and Netherlands and that thousands of acts of violence happen in Europe which result in casualties.

Saying that the media and politicians manipulate people's perceptions of Islam with terrorist groups like Islamic State of Iraq and Sham (ISIS) and the 9/11 incidents and that this manipulation results in serious increase in hate crimes, the president of the watchdog suggested some solutions:

- European countries must regard their citizens of foreign origin that have been living in their countries for generations as being equal with other citizens.

- Legal regulations should be proposed to protect foreigners' rights, and the governments should take important steps to ensure their citizens' security of life and property. International organizations like the United Nations and the European Union should take persuasive steps.

- Islamophobia must be accepted as a crime and penal sanctions should be signed into law. As the term "Islamophobia" is Islamophobic itself, expressions like "Hatred against Islam", "Opposition to Islam" and "Hostility towards Muslims" should be used.

Calling for the foundation of a special unit that will focus on Islamophobia within the Turkish Ministry of European Union Affairs, Küçük said "Hotlines should be set up for violations of rights within Turkey's diplomatic missions in Europe. Critical information regarding the issue should be collected and reported to the authorities."

Küçük further added that the media should focus on the rising Islamophobia in the West, and the Organization of Islamic Cooperation should support the collaboration against Islamophobia and take steps internationally.

Before finishing his speech, Küçük added that the media, politicians, artists, academics, members of non-governmental organizations and business world should work together to bring the rising hatred, Islamophobia, xenophobia and racism to the agenda.

After he read the decleration, the conference "The Rising Discrimination in Europe" was held in Bağlarbaşı Congress and Cultural Center.
Last Update: May 12, 2015 6:35 pm
RELATED TOPICS