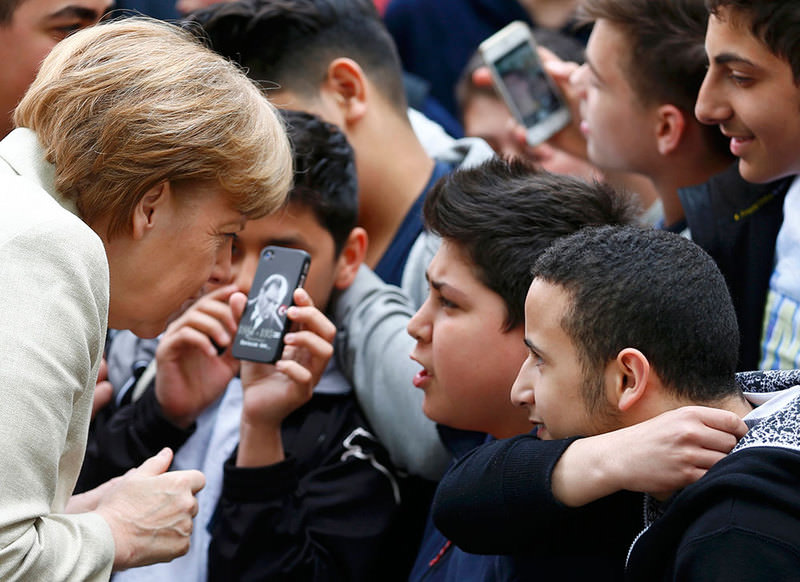 by Daily Sabah May 13, 2015 12:00 am
The German Chancellor Angela Merkel appeared in many selfies on Tuesday which Turkish students took during the Chancellor's visit to a high school in Berlin. Merkel's visit was supposed to focus on the future of the European Union, on the so-called "EU-Project Day", the idea of which was launched by the Chancellor herself eight years ago during her presidency at the EU Council. To mark the day, German politicians visit schools to inform the students about the policies of the EU .

The focus of Merkel's visit, however, quickly shifted to the long-debated issue of integration of Turkey into the EU, with the presence of many Turkish-origin students at the school located in Berlin's Neuköln district, which is characterized by a high percentage of immigrants, particularly of Turkish descent.

"I think the policy of Merkel is not good at all, because they do not want to include Turkey in the EU," said one of the ninth graders of the Röntgen School, which takes its name from the physicist Wilhelm Conrad Röntgen, reported the German daily Der Tagesspiegel. The boy's parents are from the Turkish capital Ankara, reported Der Tagesspiegel.

It is not the abstract concepts of EU policies that interest the students, but rather the real-life difficulties Turkish- and Arab-origin students face in their interactions with Germans, some German media outlets said following Merkel's visit to the school.

"It is about how someone who is stamped with 'North-Neuköln' [district of mostly immigrants] in Germany can get an apprenticeship training position and later a job," wrote Peter Müller of German daily, Spiegel. Fatma, a 15-year-old with a headscarf, reportedly complained to Merkel of the difficulty of getting an internship in kindergarten, because parents do not want teachers wearing headscarves.

As Merkel wandered among the students, she came across a mobile phone, on the back of which was a sticker. Merkel asked the owner of the mobile phone, who the sticker was meant to portray, to which the child replied "Atatürk", the founder of the Republic of Turkey.