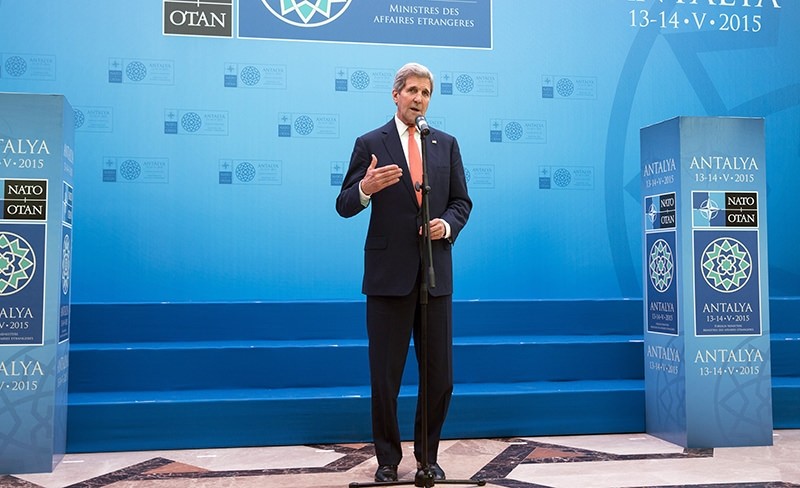 | AP Photo
by Mehmet Solmaz May 13, 2015 12:00 am
U.S. Secretary of State John Kerry on Wednesday, speaking of an "enormous moment of opportunity" for a resolution of the conflict in Ukraine, said it is critical that Russia take action to help implement a cease-fire deal in Ukraine. "This is a critical moment for action by Russia, by the separatists [in Ukraine] to live up to the Minsk Agreement," Kerry said on the margins of the NATO Foreign Ministers Meeting.

"The reforms, the election process, the working groups, this is an enormous moment of opportunity for the conflict there to find a path of certainty and resolution," he added, calling on Russian President Vladimir Putin and separatists in Ukraine to "come together to work with" the government in Kiev.

Davutoğlu said the crisis in Ukraine showed how fragile security and stability in Europe is, adding that Ukraine should be supported so that it can better provide security to its own people. "While extending our hand to Ukraine, we should not forget particularly the sufferings of the Crimean people. Illegal annexation of Crimea cannot be accepted in anyway. Maintaining our contacts with Crimean Tatars and preventing their isolation is crucial in this regard," he added.

The U.S. and EU have imposed a series of economic sanctions on Russia in a bid to bring about peace in Ukraine.

Kerry said NATO countries agree that they prefer "not to have sanctions," but also warned that they "will be there in an effort to try to secure the peace that everybody wants in Ukraine." He spoke after visiting Russia for the first time in two years on Tuesday for a meeting with Putin in the Black Sea resort of Sochi.

Kerry briefed his NATO counterparts on Wednesday morning about the encounter.

Relations between Moscow and the West have plummeted to their lowest point since the Cold War over the Ukrainian conflict. The West accuses Russia of supporting the separatists, thus fomenting instability, a charge that Moscow denies.
Last Update: Oct 13, 2017 3:06 pm
RELATED TOPICS