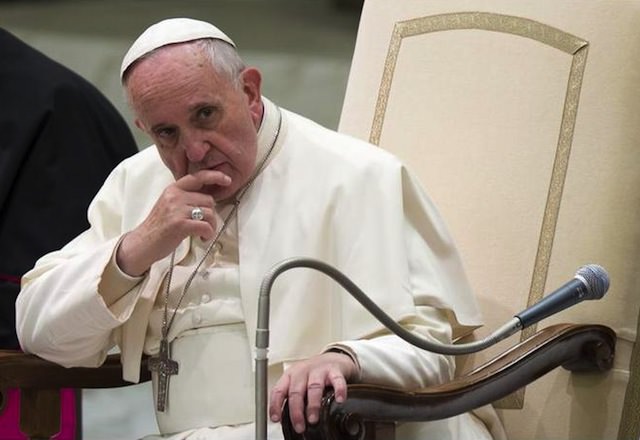 |AP Photo
by Compiled from Wire Services May 13, 2015 12:00 am
The Vatican has officially recognized the state of Palestine in a new treaty.

The treaty, which was finalized on Wednesday but still has to be signed, makes clear that the Holy See has switched its diplomatic relations from the Palestinian Liberation Organization to the state of Palestine.

The Vatican had welcomed the decision by the U.N. General Assembly in 2012 to recognize a Palestinian state. But the treaty is the first legal document negotiated between the Holy See and the Palestinian state and constitutes an official recognition.

Palestinian President Mahmoud Abbas is due to see Pope Francis on Saturday before the canonization of two new saints from the Holy Land a day later.

In 2012, Palestine was recognized by the UN as a non-Member observer state. Two years later, an unprecedented international support for the symbolic recognition of a Palestinian state within the 1967 borders was voiced out.

This support was brought about by a series of motions adopted by a number of European parliaments. The Swedish parliament was the first to catalyze the momentum of recognition of the Palestinian state earlier this year.

In October, Sweden officially recognized the State of Palestine, becoming the first European Union state to take such a move.

In this, however, Sweden was the eighth European state to recognize the Palestinian state after the Czech Republic; Hungary; Poland; Bulgaria; Romania; Malta, and Cyprus, which made their recognition some time before they became European Union members.

While Sweden was the 135th state to recognize the state of Palestine. Its October move reverberated in many European capitals. Five European parliaments followed in Sweden's footsteps by symbolically recognizing the Palestinian state later.

On October 13, Britain's House of Commons adopted a non-binding resolution, urging the government to recognize the State of Palestine.

A month later, the Spanish Parliament voted with an overwhelming majority on a non-binding resolution, urging Madrid to recognize a Palestinian state within the 1967 borders.

France followed suit on December 2, after a majority of French lawmakers approved a non-binding resolution, calling on Paris to recognize the Palestinian state.

On December 11, the Irish parliament adopted a non-binding bill, urging the Irish government to recognize the State of Palestine. A day later, the Portuguese parliament took a similar step.

In February, the parliaments of Belgium and Italy adopted similar resolutions.

Such a momentum encouraged a number of European Parliament blocs to suggest that the European Union, which has a total of 28 member states, recognize the State of Palestine.

Nevertheless, the European Parliament only recognized the Palestinian state in principle, without committing member states to do the same, a move some commentators attributed to what they described as "political considerations" within the parliament.

The overwhelming majority of countries in Africa, Asia and Latin America have recognized the state of Palestine, making up most of the 135 countries who had taken the move.
Last Update: May 13, 2015 6:20 pm
RELATED TOPICS