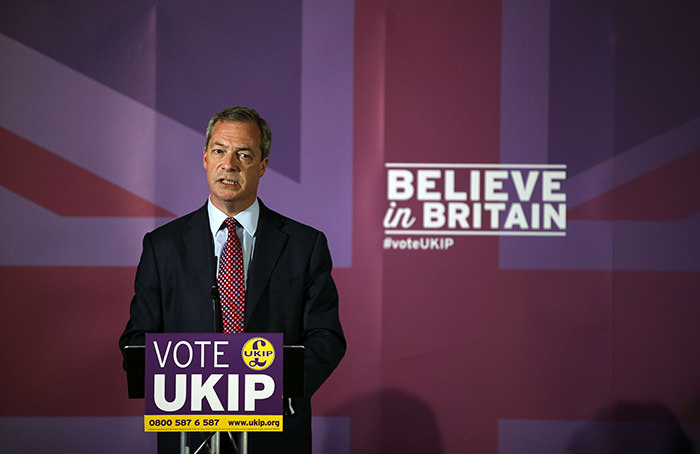 A week after the general election, UKIP party was shaken by bitter infighting as the party leader Farage was accused of having an aggressive leadership style that risks turning the party into an ‘absolute monarchy’

Britain's anti-EU U.K. Independence Party (UKIP) has been shaken by an internal dispute over the leadership style of party leader Nigel Farage, amid growing calls for Farage to resign from UKIP's leadership position. A leadership contest is very likely to happen, a senior UKIP source told the BBC.

Stating his unease about the UKIP's leader's behavior, party campaign chief Patrick O'Flynn on Thursday told The Times newspaper he feared Farage had turned into a "snarling, thin-skinned, aggressive" man from being a "cheerful, ebullient, cheeky" politician. In an interview with Sky on Thursday, UKIP's campaign chief surprisingly blamed Farage's two "poisonous" advisers for leading the party to an "absolute monarchy" adding that he does not want Farage to step down and lead the party for a four-year term during the referendum campaign.

The former UKIP Member of Parliament Godfrey Bloom, who was suspended from the party for homophobic and sexist comments, described the UKIP leadership as "a poison chalice." He called on Farage to resign and suggested Douglas Carswell for the leadership position. Bloom described Farage as "a poor manager" and incapable of "tolerat[ing] dissent."

Facing a powerful attack on his leadership role, UKIP leader Farage hit back at his campaign chief saying O'Flynn has "personal problems and this may be the manifestation of them," as reported by the Guardian.

Farage had resigned as leader of the eurosceptic U.K. Independence Party after failing to get elected to the British parliament. But, he took the reins again a few days later when party executives said his resignation had been rejected. Farage also criticized the country's winner-takes-all electoral system; the first-past-the-post that serves only big parties, essentially creating a two-party system. Those who vote for small parties do not get representation in parliament in proportion to the votes they get.

In last week's general election, UKIP ended up with 12.6 percent of the vote and only one seat. These results show the electoral system was able to stop the far-right UKIP from being represented at the British parliament in proportion with the votes it gets.

Despite the increasing support for smaller parties, the electoral system gives priority to achieving stability during the formation of the government, paving the way for two party systems. The growing concern over the increasing number of immigrants living in the country has led to an increase in votes for the anti-EU and anti-immigration far-right UKIP party over the past year. The border control and security issue was placed at the heart of electoral campaigns, while opinion polls showed that there is a steady increase in support for UKIP.
Last Update: May 14, 2015 9:45 pm
RELATED TOPICS