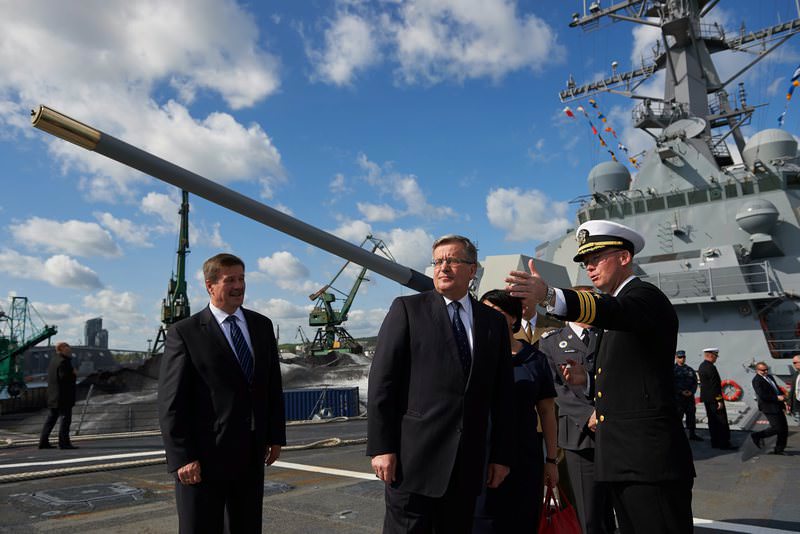 by Daily Sabah with Reuters May 14, 2015 12:00 am
Poland plans to voice its concerns about the Russian threats on its soil at the NATO summit in Warsaw next year, it said on Thursday in an official internal document. It also wants a permanent NATO troop presence and heavy equipment to prevent increased Russian military activity.

The Baltic states - Lithuania, Latvia and Estonia - said they were also preparing a joint approach to NATO command asking for permanent stationing of a brigade. All three former Soviet republics have Russian minorities and fear Kremlin moves to inflame tensions there after a pro-Russian insurrection in eastern Ukraine.

Polish proposals contained in a planning paper agreed by the National Security Bureau and seen by Reuters, underlined the depth of feeling across eastern Europe over a war that has cost over 6,100 lives and raised fears of a Russian expansionism.

There are also reports of increased military air and naval activity in the Nordic region. Moscow, subject of economic sanctions over Ukraine, denies any territorial ambitions and describes its manoeuvres as routine.

Poland's then foreign minister said last year he wanted the alliance to station two heavy brigades - a NATO brigade typically numbers between 3,000 and 5,000 troops - on Polish soil in response to what the West sees as Kremlin intervention in Ukraine. Moscow denies it has backed the rebels.

But the alliance rejected a permanent troop presence, with some states wary of violating a 1997 NATO-Russia agreement about the size of forces the alliance can station in former Warsaw Pact countries, of which Poland is one.

Under Polish objectives listed for the NATO summit in Warsaw in mid-2016, the document refers to "seeking NATO's permanent regional presence", and added in parentheses "military bases with heavy equipment".

Moscow would almost certainly cite the establishment of a standing NATO presence on its borders as a hostile act.

The document is not a firm commitment that Poland will make the request at the summit. General Stanislaw Koziej, head of the National Security Bureau, told Reuters Warsaw's position could change before the summit, for example, if Russia were to comply with the Minsk peace agreement for eastern Ukraine.

But he said: "Unfortunately, I think there is no chance this agreement is fulfilled."

The Minsk agreement, whose signatories include Kiev and Moscow, called a ceasefire between Ukrainian and rebel forces. Though violence has declined, clashes still occur and Kiev fears separatists might soon try to seize a key port city.

Koziej said Poland would be seeking to turn the current NATO presence in eastern Europe into a permanent one. NATO has, or plans to have, command centres in the region and troops from different countries stationed in turn.

"It's also about defence infrastructure, bases with supplies, fuel, spare parts, weapons and so on," Koziej told Reuters in an interview authorised for release on Thursday.

"We would like the decisions at the next [NATO] summit to go in that direction."

Harri Tiido, Estonia's ambassador to Warsaw, told Reuters his government had regular meetings with Poland on defence. "We will definitely coordinate our preparation for the Warsaw Summit as well, including lobbying, if necessary."

A NATO spokeswoman declined to comment on the Polish document, but said the alliance was "implementing the biggest reinforcement of NATO collective defence since the end of the Cold War."

She said the alliance was setting up NATO command and control units in six eastern allies, including one in Poland. "NATO will defend all allies against any threats," the spokeswoman said.
Last Update: May 14, 2015 7:40 pm
RELATED TOPICS