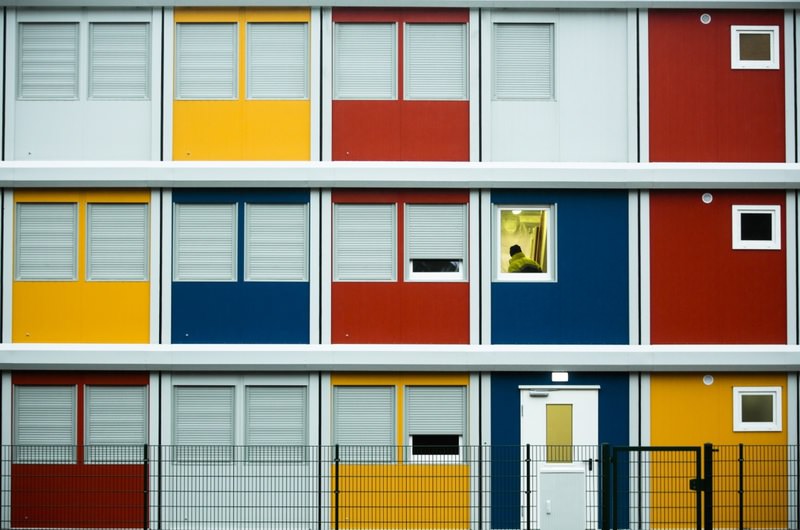 by Daily Sabah with DPA May 14, 2015 12:00 am
Temporary accommodation constructed from containers is increasingly being deployed for the increasing number of refugees coming to Germany. Demand is so great that there are occasional supply bottlenecks, and "villages" comprised of those containers have been constructed. This emergency accommodation solution is also criticized from many aspects.

"We create space for temporary architecture," is one of the advertising slogans of German company Algeco, which constructs offices and accommodation for industry, construction sites, fairs, bank branches, schools and kindergartens out of containers.

The highest demand for the containers at the moment for the company, based in the border town of Kehl on the other side of the Rhine from France's Strasbourg, is as a result of temporary accommodation for refugees.

Germany's Federal Office for Migration expects 300,000 refugees to arrive in Germany in 2015, while local councils put the figure much higher at 450,000 at least, putting them under severe pressure.

As they struggle to cope with the number of refugees assigned to them, local councils are increasingly turning to container villages as an emergency solution for accommodation.

For the container producers, it is proving to be a lucrative business.

In the capital Berlin, there are already two container villages, with a further four expected to be ready by August. The six cost 42.7 million euros (48.7 million dollars) and are expected to accommodate 2,186 refugees, averaging around 20,000 euros per person.

These facilities will be nowhere near enough to accommodate all the refugees, so the Berlin Senate is preparing to provide a further 36 large hostels in permanent buildings to house 7,200 more refugees at a cost of more than 160 million euros.

There are not many manufacturers who can quickly provide container villages to the desired quality standards with communal bathrooms and kitchens.

Because so many towns and villages want the containers, there are occasional supply bottlenecks.

In the northern port city of Bremen, the opening of a refugee facility was put back by 10 weeks owing to delivery delays, while two projects in Cologne had to be postponed.

For Berlin's six container villages, the contracts went to the companies ProContain from near Dresden, CHB Bonitz from Berlin and Algeco.

Demand for dwelling containers has risen sharply in the past two years, Algeco spokeswoman Catherine Thiebaut said, most recently because Germany had a programme of extending its kindergartens.

Now more and more requests are coming in from local councils to provide containers for refugee accommodation, Thiebaut said.
The advantage of container modules is that they can be assembled in a few weeks and rapidly relieve the acutest housing shortages.

Unfortunately, their bright colours tend to stick out in more established neighbourhoods, and despite good insulation, the climate inside the steel-panel walls is not the most comfortable, according to Michael Heide, director of the Central German Association of the Building Industry.

Georg Classen of the Berlin Refugee Council considers the accommodation of refugees in containers as extremely problematic for several reasons.

"The container settlements may meet formal standards, but they do not offer any privacy in the cooking and sanitary areas," he said.

The isolated sites, mostly on the edge of communities, also send out the signal: "You do not belong to us," according to Classen.
It was therefore no surprise when right-wing extremists ended their protests in places like Berlin-Buch, a recently opened container village, Classen said. Neo-Nazis demonstrated there and attacked security guards.

Despite the objections, the suppliers' order books are full. And the state of Saxony-Anhalt has just ordered containers to accommodate 500 more people at its central reception point in the town of Halberstadt.
Last Update: May 14, 2015 7:39 pm
RELATED TOPICS