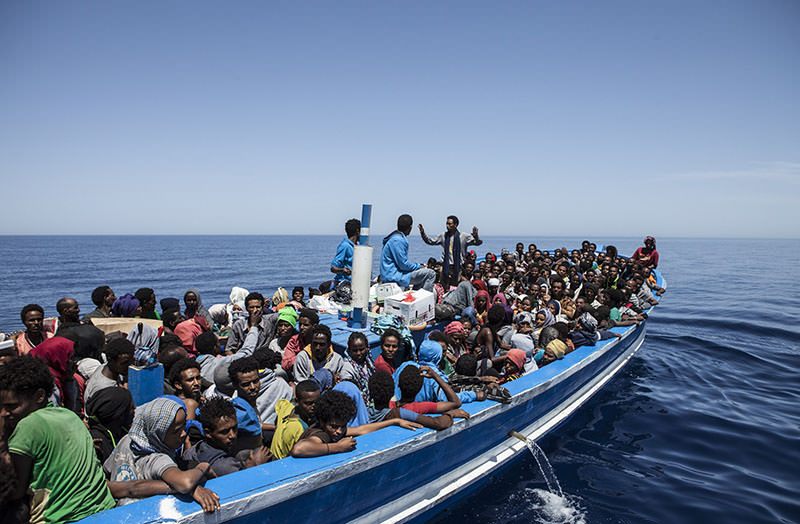 This handout picture taken on May 3, 2015 released by the MOAS (Migrant Offshore Aid Station) shows migrants aboard a wooden boat on the Mediterranean Sea (AFP Photo)
by Daily Sabah May 17, 2015 12:00 am

The unresolvable Mediterranean migrant crisis has created a security flow for European countries as ISIS militants hidden in smugglers' boats have allegedly traveled to Europe alongside refugees, posing a security threat for Europe

With no effective control by the central government to provide security across Libya, Islamic State and al-Sham militants can easily travel to Europe across the Mediterranean by hiding in smugglers' boats, a Libyan official told the BBC on Sunday. Libyan government official Abdul Basit Haroun asserted that smugglers were hiding ISIS militants aboard their vessels full of migrants. The militants use "the boats for their people who they want to send to Europe as the European police don't know who is from ISIS and who is a normal refugee," he said in an interview with BBC Radio 5.

People smuggling has become a major security issue in Libya, severely effecting European countries, with Libya becoming the major port favored by smugglers for illegal immigration. The country has no control or security checks at the border. As the crisis leads to more people fleeing the country, militias groups loyal to either the Tobruk government or the Tripoli government have made huge sums of money by cooperating with people smugglers as they allow them to pass through their territory.

While Libya cannot cope with the illegal human smuggling, the opposition to the EU migrant plan proposed by the European Commission prevents European countries from taking joint action to end the migrant crisis. As the EU bloc is split over the migrant plan to act decisively over ending migrant tragedies in the Mediterranean Sea, the lack of a joint plan over the migrant crisis has led European countries to becoming more prone to possible militant attacks. France, which opposes the European Commission's migration plan, called on an effective system of border controls and a way for asylum seekers to be more fairly distributed among EU bloc countries. "I am against quota implementation while accepting refugees, which does not overlap with our proposals, and we propose a fair distribution of refugees among the EU," French President Manuel Valls said Saturday. "The right to seek asylum should be granted in line with international standards in all countries of the EU," he added.

The first rejection of the EU's migrant response came from the U.K., which favors deploying gunships to tackle trafficking gangs. The U.K. had refused to participate in earlier rescue missions to save migrants attempting the dangerous sea crossing. The denial came

on the basis that such a mission would create a pull factor for illegal immigration while encouraging more migrants to leave their home countries to live in the better conditions that exist in the U.K. Regarding the EU-wide quota for refugees, Britain insisted that asylum seeker distribution among EU countries should be done only on a voluntary basis. Hungary, Slovakia and Estonia also opposed the EU migrant quota scheme. For some EU member states, taking in more migrants only makes the problem worse, arguing that it attracts more migrants into risking their lives on the perilous Mediterranean crossing. For others, such as Germany, there has to be a humanitarian response to the disaster and the best way to ease the problem is to spread the refugees more fairly between member states.

The European Commission's migration plan is composed of two new measures to stop migrant tragedies – a U.N.-mandated gunship plan and a migrant quota that forces member states to share the burden. The bloc is keen to crack down on criminal networks operating out of volatile Libya, however, a military mission tasked with intercepting and destroying vessels used by the smugglers seems to not be an option.
Last Update: May 17, 2015 9:13 pm
RELATED TOPICS