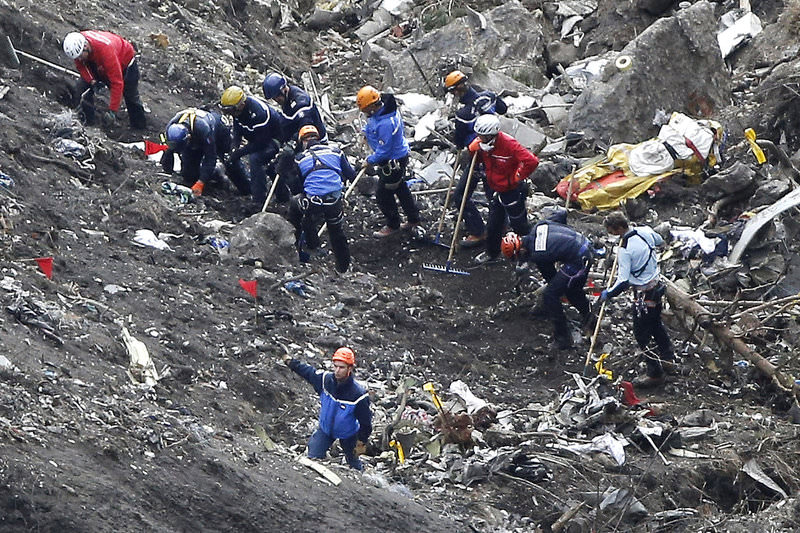 In this March 26, 2015 file photo, rescue workers work on debris of the Germanwings jet at the crash site near Seyne-les-Alpes, France (AP Photo)
by Daily Sabah with Agencies May 19, 2015 12:00 am
Marseille prosecutor, Brice Robin announced on Tuesday that all 150 victims of the Germanwings plane crash over the French Alps in March have been identified and their bodies will be turned over to the families.

The prosecutor said in a statement that the Identification Commission, which met on May 15 in Marseille, "has validated the identification of 150 victims."

"The 150 death certificates have been signed, as well as the permits for burial," the statement said.

It said the identification was completed after the analysis of DNA provided by relatives of the victims.

Prosecutor Robin added that officials at German airline Lufthansa -- Germanwings' parent company -- were handed copies of death certificates in order "to allow the return of the victims' bodies to their families."

Authorities say co-pilot Andreas Lubitz intentionally crashed the Barcelona-Duesseldorf flight into a mountain, but are still puzzled over why. Investigators say Lubitz, who had suffered from suicidal tendencies and depression in the past, locked the captain out of the plane's cockpit on March 24 and sent the Airbus hurtling into a mountain, killing everyone on board.

The air disaster in March was one of the most tragic incidents in recent German history and the first deadly crash of a Germanwings plane since the low-budget airline was founded by Lufthansa in 2002.
Last Update: May 19, 2015 11:33 pm
RELATED TOPICS