Britain presses for EU reform during summit in Latvia 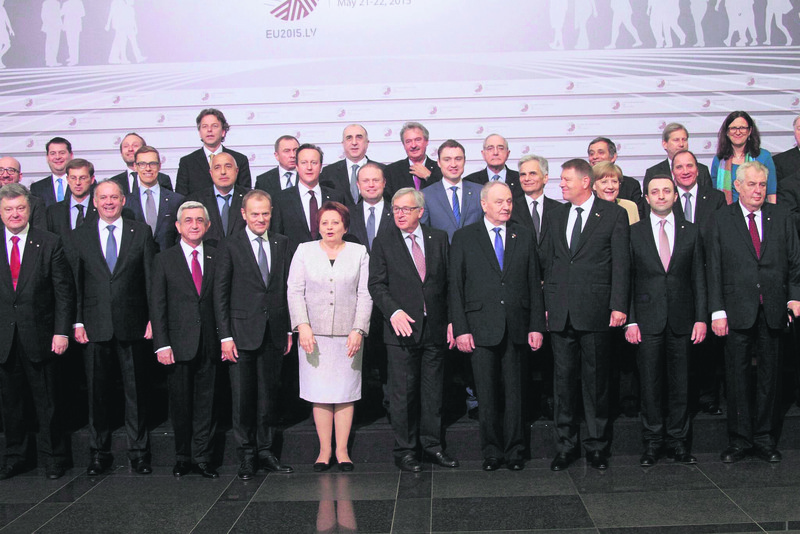 The EU bloc together with six ex-Soviet countries leaders pose before the summit started in Latvia.
by Daily Sabah May 22, 2015 12:00 am

On the sidelines of a European Union summit with six ex-Soviet republics in Latvia, British Prime Minister David Cameron held talks with European Council President Donald Tusk and a handful of EU government heads in order to negotiate with the bloc leaders over the EU's immigration policies. After holding a series of informal talks with fellow EU leaders, British Prime Minister Cameron used the Latvia summit to start his campaign over EU reforms. In a bid to renegotiate ties with the EU ahead of an in-out referendum on membership due by the end of 2017, the British prime minister will visit Paris and Berlin next week as part of his campaign to persuade French and German leaders to implement reforms that would prevent Britain from exiting the EU.

Before heading to Riga on Thursday, Cameron hardened his position on "uncontrolled" immigration and border control issues in a proposed plan that sets an immigration red line. The plan proposes "controlling migration by making it harder for EU migrants to claim state benefits in Britain, opting out of the EU's commitment to 'ever closer union' and handing some powers back to national parliaments." While demanding structural changes in EU policies, the proposed plan would reshape Britain's position in the European Union, contingent upon the EU leaders' positive attitude toward EU reforms. However, the EU bloc leaders are so far reluctant to make concessions to Britain as the country is neither a member of the eurozone nor bound by the Schengen Agreement of 1985. European Parliament President Martin Schulz said that debates with Cameron were "always difficult." Lithuanian President Dalia Grybauskaite opposed Britain's demands to "receive additional opt-outs." Britain's demands on immigration challenges the EU's core principles, such as freedom of movement, which are non-negotiable.

Cameron has come under pressure to cut immigration as the net immigration to the Britain rose from 209,000 in 2013 to 318,000 last year, according to the Office for National Statistics. As Cameron struggles to get net migration down to the "tens of thousands," the figure shows the highest level in immigration to the country.

British Prime Minister Cameron earlier announced a reform plan on cutting the number of low skilled EU immigrants in 2014. Britain's proposed immigration cap includes restrictions imposed on migrants from EU member states. The latest British move is expected to hit the 11 Eastern European states whose citizens benefit most from the EU immigration policy that supports freedom of movement within member states. Migration to Britain from other countries in the EU has been a sensitive issue as there has been growing concern over the increasing number of immigrants living in the country. Amid Britain's call for EU reforms, Britain wants its demands to be heard in order to encourage its citizens to cast a "no" vote in the in/out referendum on British membership in the EU.

The EU's Eastern Partnership brings together ex-Soviet countries Belarus, Ukraine, Moldova, Armenia, Azerbaijan and Georgia. The Eastern Partnership initiative seeks to strengthen cooperation with other European countries. Russia considers the cooperation between the EU bloc and the ex-Soviet states as an "anti-Russian move," which contradicts Russian interests in the former Soviet countries in a statement in April. Yet, Russia has long been a considerable influence over these ex-Soviet countries - Armenia and Belarus are members of both the Eastern Partnership and the Eurasian Economic Forum chaired by Russia. The EU has been struggling to break Russian influence over the region. Azerbaijan is showing little excitement about the EU partnership, sending its foreign minister to Riga instead of its president. Armenia's vital alliance with Russia would be strengthened by accession into the Eurasian Economic Union, as it would be expected to become more dependent on Russia in commercial and political matters. Azerbaijan showed little excitement about the EU partnership, as it sent its foreign minister to Riga instead of its president. Ukraine, Georgia and Moldova seek deeper integration with the EU as the Russian influence remains high.
Last Update: May 23, 2015 12:41 am
RELATED TOPICS