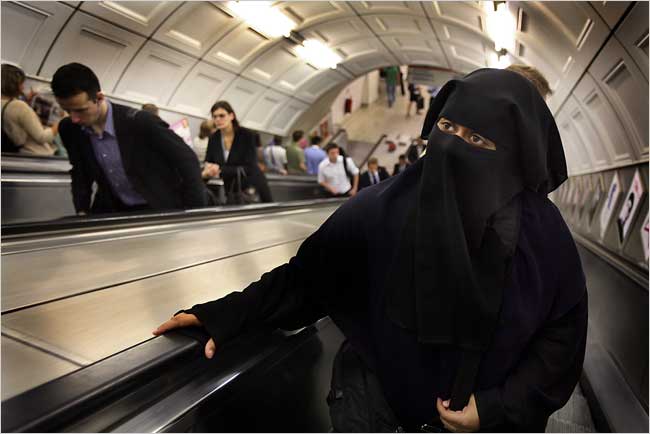 by Daily Sabah with Wires May 22, 2015 12:00 am
The Dutch cabinet on Friday approved a partial ban on wearing the face-covering Islamic veil, including in schools, hospitals and on public transport.

"Face-covering clothing will in future not be accepted in education and healthcare institutions, government buildings and on public transport," the government said in a statement after the cabinet backed Interior Minister Ronald Plasterk's bill.

The ban does not apply to wearing the niqab on the street, but only "in specific situations where it is essential for people to be seen" or for security reasons, Prime Minister Mark Rutte told journalists after the cabinet meeting.

"The bill does not have any religious background," Rutte said.
The government said it had "tried to find a balance between people's freedom to wear the clothes they want and the importance of mutual and recognisable communication."

A previous bill banning the niqab even on the street and dating from Rutte's last government, which was supported by anti-Islam populist Geert Wilders, will be withdrawn.

The government said it "sees no reason for a general ban that would apply to all public places."

It was agreed that a new bill would be drawn up by the coalition partners of Rutte's Liberal VVD party and the Labour PvdA when they formed their coalition in 2012.

State broadcaster NOS said that between 100 and 500 women in the Netherlands wear the niqab, most of them only occasionally.

Several European countries have introduced at least partial niqab bans despite accusations of restricting religious expression.
The Dutch government said it would send its draft law to the highest court in the Netherlands, the Council of State, for its opinion.

That opinion and the bill's text will be made public when parliament begins debating the law at a date yet to be decided.
France introduced a ban on women wearing the niqab in 2010, resulting in a handful of arrests since then.

Under the French ban, women wearing full-face veils in public spaces can be fined up to 150 euros.

Belgium and some parts of Switzerland have followed France's lead and similar bans have been considered in other European countries.

Attempts to enforce the legislation in France have however proved problematic and sometimes sparked confrontations.
Last Update: May 22, 2015 7:12 pm
RELATED TOPICS