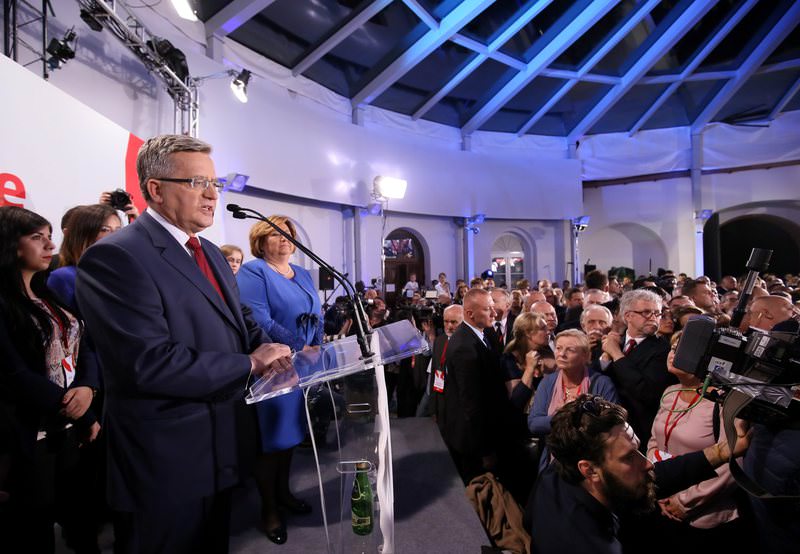 by Associated Press May 25, 2015 12:00 am
Polish President Bronislaw Komorowski conceded defeat in the presidential election Sunday after an exit poll showed him trailing Andrzej Duda, a previously little-known right-wing politician.

The exit poll said 53 percent of the votes in Sunday's final round of the presidential election went to Duda and 47 percent to Komorowski. It was conducted by Ipsos and reported by the public broadcaster TVN. It has a margin of error plus or minus 2 percentage points.

Final, official results are expected to be released Monday.

"I congratulate my competitor Andrzej Duda and wish him a successful presidency," Komorowski said.

The mood was joyous at the election night gathering of Duda's Law and Justice party over what is apparently its first significant electoral victory in nearly a decade. There was an explosion of cheering and people flashed V signs for victory.

"We can change Poland," Duda, 43, told his supporters. He vowed an open presidency based on unity and said that it would take a lot of difficult work to fix the country's problems.

Polish presidents have fewer powers than prime ministers and their governments, but the president does represent the nation internationally and helps set a political and moral tone at home.

Duda's apparent victory has exposed a rising disillusionment with the long-ruling Civic Platform party, the pro-European party that Komorowski is closely tied to, ahead of the more important parliamentary elections this fall.

In eight years of rule, Civic Platform has overseen unprecedented economic growth that has helped the country raise its profile internationally, something seen in the election of the former Polish prime minister, Donald Tusk, as head of the European Union.

But the party has been hurt by corruption scandals, and many Poles are angry that the country's much-touted economic growth has only not trickled down to many Poles, with low wages and job insecurity still motivating many to seek a better life abroad.