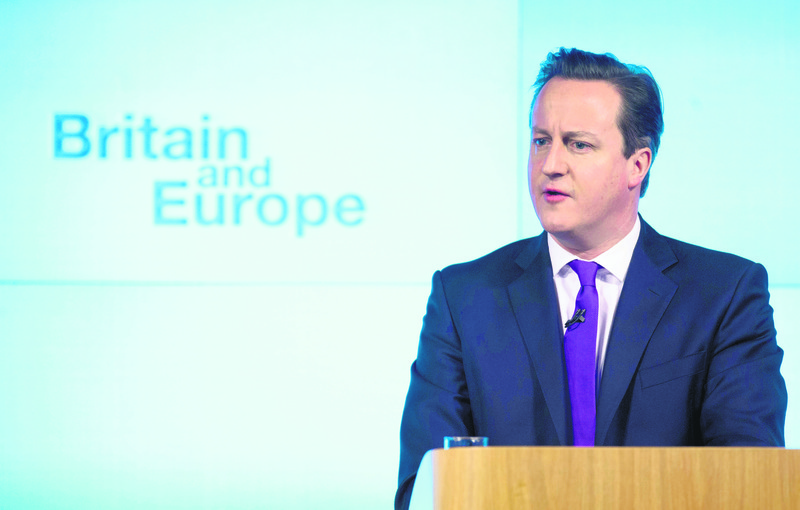 David Cameron, who is known for his skeptical stance toward the EU is eagerly supporting the referendum.
by Begüm Tunakan May 25, 2015 12:00 am

In an effort to boost the eurosceptic campaign, U.K. PM Cameron has excluded European migrants from voting in the EU referendum while the pro-European Labour party is pushing to lower the voting age to 16 in order to prevent a potential exit from the EU bloc

Ahead of the in-out referendum on Britain's EU membership due by the end of 2017, the British Conservative government announced that only British, Irish and Commonwealth citizens residing in the U.K. will be allowed to vote in an in-out referendum. The move excludes nearly 2.8 million non-British people residing in the U.K. from voting in an effort to boost the chances for an exit from the EU. The opposition Labour Party favors reducing the voting age to 16. Turkey, a candidate for EU membership, is closely following the process.
Amid growing tensions over the referendum within the country, Turkey, a candidate for EU membership, is closely following whether the British will favor remaining an EU member state or will leave the bloc.

As part of a pro-EU campaign from the Labour Party and Scottish National Party (SNP), the lowering of the voting age to 16 is expected to increase the chances of staying in the EU. Young people are more likely to favor Britain's EU membership, as suggested by a poll conducted by YouGov among 18- to 24-year-olds. The Guardian reported that 63 percent want Britain to stay in the EU.

The ban on EU migrants from voting comes amid heated political debate over immigration policy. Cameron earlier announced a reform plan on cutting the number of low-skilled EU immigrants in 2014. Britain's proposed immigration cap includes restrictions imposed on migrants from EU member states, hitting the 11 Eastern European states whose citizens benefit most from the EU immigration policy that supports freedom of movement within member states. Migration to Britain from other countries in the EU has been a sensitive issue as there has been growing concern over the increasing number of immigrants living in the country. Despite the Conservatives' negative attitude toward low-skilled European immigrants, they are major contributors to the country by paying more tax than they cost the British welfare state, according to a study conducted by the UCL Centre for Research and Analysis of Migration (CReAM)

With a growing number of refugees seeking refuge in Britain, the Conservative government declined to participate in the U.N.-administered resettlement program for displaced people in 2014. Supporting anti-immigration policies, it also refused to participate in rescue missions to save migrants attempting dangerous sea crossings. The denial came on the basis that such a mission would create a pull factor for illegal immigration while encouraging more migrants to leave their home countries to live under the better conditions that exist in the U.K.

Meanwhile, Cameron, who is committed to holding a referendum by 2017, met Jean-Claude Juncker, president of the European Commission, to renegotiate the terms of Britain's EU membership. Amid Britain's call for EU reform primarily on immigration, welfare eligibility and power to refuse further integration, whether Britain will stay in or get out of the EU depends on "ambitious" EU reforms. According to a poll conducted by Open Europe on the EU referendum, 41 percent of U.K. voters would vote to leave the EU under the current membership terms. However, the number of U.K. voters who would opt to leave decreased to 32 percent if reform is achieved by the EU. The poll suggests that "the best way to reduce the risk of Brexit … is to quickly push ahead with ambitious reform of the EU."

Cameron hardened his position on "uncontrolled" immigration and border control issues in a proposed plan that sets an immigration red line. The plan proposes "controlling migration by making it harder for EU migrants to claim state benefits in Britain, opting out of the EU's commitment to an 'ever-closer union' and handing some powers back to national parliaments," which he has described as an "absolute requirement." The EU referendum bill will be introduced to parliament by Cameron on Thursday. The British prime minister will visit a series of European capitals to seek support from the leaders of Denmark, the Netherlands, France, Poland and Germany on EU reforms. While demanding structural changes in EU policies, the proposed plan would reshape Britain's position in the European Union, contingent upon EU leaders' positive attitude for EU reforms.
Last Update: May 25, 2015 10:58 pm
RELATED TOPICS