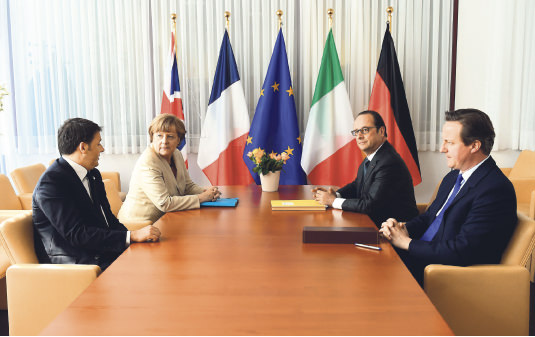 by Daily Sabah May 26, 2015 12:00 am
France and Germany, two of the founding states of the European Union, have agreed to show greater commitment to create an "ever-closer union" as a response to Britain's demand for structural changes in EU policies. The French-German accord is seen as a major blow for British Prime Minister David Cameron, who is pushing EU countries for changes to the Treaty of Lisbon, the EU's constitutional treaty. German Chancellor Angela Merkel and French President François Hollande have sealed an agreement that calls for a series of reforms that are in accordance with the current EU treaty, the Guardian reported. The proposal will be introduced in the upcoming EU summit in June. The continuing reluctance to reopen the Treaty of Lisbon among other EU leaders would disrupt Cameron's EU referendum campaign.

The Treaty of Lisbon entered into force on Dec. 1, 2009, after successive EU enlargements for Romania and Bulgaria in 2007 paved the way for the need to reform the structure of the EU and the way in which it functions. The Treat of Lisbon has introduced major reforms in both the internal and external policies of the EU and EU institutions while strengthening the democratic dimension of the union. However, the reforms introduced by the treaty have been widely considered by British authorities demanding a reshaping of relations between the U.K. and EU and repatriating powers from Brussels.

Amid Britain's call for EU reform, primarily on immigration, welfare eligibility and power to refuse further integration, whether or not Britain will stay in the EU depends on EU reforms. The U.K.'s proposed plan would reshape the country's position in the European Union, contingent on EU leaders' positive attitude toward EU reforms. However, EU bloc leaders are so far reluctant to make concessions to Britain as the country is neither a member of the eurozone nor bound by the Schengen Agreement of 1985.

Meanwhile, Cameron urged the European Commission president that Europe must change its core principle of the free movement of people within the boundaries of EU. Talks between the Cameron and the European Commission president on Monday focused on reforms in the European Union and renegotiating the UK's ties with Brussels, a British government spokeswoman said. "The prime minister underlined that the British people are not happy with the status quo and believe that the EU needs to change in order to better address their concerns," she said.

Cameron earlier announced a reform plan on cutting the number of low-skilled EU immigrants in 2014. Cameron's immigration cap is incompatible with the EU's founding principle as the EU treaties allow all EU citizens to work and travel within the EU territories. Britain's proposed immigration cap includes restrictions imposed on migrants from EU member states, hitting the 11 Eastern European states whose citizens benefit most from the EU immigration policy that supports freedom of movement within member states. Migration to Britain from other countries in the EU has been a sensitive issue as there has been growing concern over the increasing number of immigrants living in the country.
Last Update: May 26, 2015 10:24 pm
RELATED TOPICS